In the state Duma a draft of the Dueling code

Moscow. September 12. INTERFAX.RU — Author was the Deputy from LDPR, who has previously proposed legislation to protect citizens from the consequences of garlic consumption. 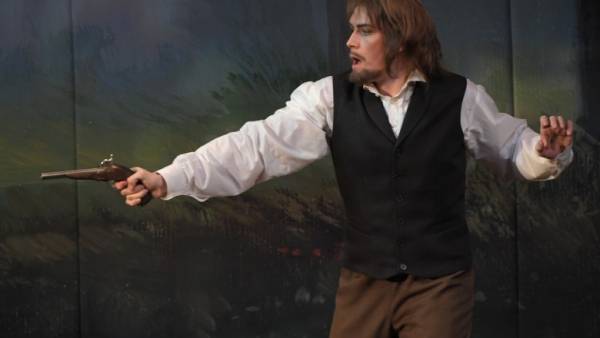 The Deputy of the state Duma from LDPR Sergey Ivanov introduced the state Duma a draft of the Dueling code, which allows the duel only between officials, the official website of the lower house of Parliament.

The author notes that in accordance with the legislation of the Russian Federation libel is a criminal offense, and the offense is an administrative offence, guilt and the responsibility for which is established by a court.

“However, recently there is a tendency on the part of state and municipal servants to duel citizens, expressing different from the official point of view. In order to streamline the main reasons for dueling and procedure proposed for the present draft of the Dueling Code”, — stated in the explanatory note to the bill.

Moreover, according to the authors of the document, between citizens of the duel is possible, but is an anomaly, not answering its intended purpose.

Of the priest and Balda. 10 embarrassing questions about PushkinWhich principles are offered

In the basic principles of duels is proposed to determine that the duel can and should only happen between equals; the basic principle and purpose of a duel is to solve the misunderstanding between the individual state or municipal servants among themselves without resorting to outside help.

A duel is a way of revenge for the insult and may not be replaced, but can not replace the judicial justice that serve to restore or protect the violated right; the insult may be applied only peer, a person not belonging to the categories of state and municipal employees can only violate their right but not to offend him.

It is proposed that the duel, as revenge for the insult, is possible and permissible only between persons belonging to the category of state and municipal employees, otherwise, the duel is invalid and is an anomaly intruding into the area of judicial competence.

Also determined that if you call a state or municipal employee with first citizen is obliged to reject the call and provide the latter the right to seek satisfaction of the court order.

For violation of law a state or municipal employee is a citizen, despite the indignity of his actions, the first must go meet the court order, as it suffered from the violation of law, but not from insults.

If, despite this, the state or municipal employee still wishes to fight, then he has that right not, except with the formal written permission of the immediate supervisor, which considers whether the enemy is doing him honor, stated in the explanatory Memorandum.

Journalists immediately asked the head of the Duma Committee on state construction and legislation Pavel Krasheninnikov (United Russia) as it relates to the idea of preparing such a Dueling code. He ironically accepted the idea of adopting such a code, jokingly saying: “the Dueling code is cool.” “I admire the creativity of Sergey Vladimirovich (Ivanov)” — with a smile he added.