Boeing blew into the river

As it became known “Kommersant”, the reason for the rough landing of Boeing 737-800 aircraft of the airline “UTair” in Sochi, which injured two dozen passengers died from a heart attack were carrying out their evacuation a rescue and was completely destroyed plane was a sudden gust of wind, in fact witakowski the car outside of the runway. Interstate viacomit (MAC) now is figuring out why the pilots of the Boeing, which the Manager first, and then the automation of the aircraft was warned about dangerous wind shear near the ground, decided nevertheless to land. 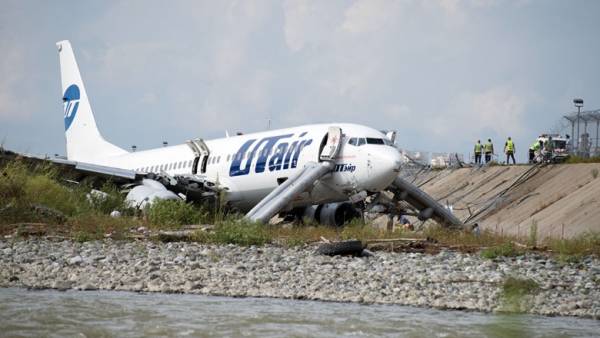 According to the close investigation of the source “Kommersant”, now versed with the circumstances surrounding the recent crash of the passenger Boeing in Sochi, has already established that the ship was landing in a regular mode. The problem the crew came suddenly, before the ground when the plane has dropped to about hundreds of meters long and went almost to the beginning of runway No. 6. At this point, his speed has increased dramatically, and the car, instead of continuing decline, rushed forward.

On this scenario, experts told the record parametrical and speech recorders of the Boeing. The “black boxes” registered a sharp spontaneous increase of ground speed of the aircraft before landing, not associated with the actions of the crew, and the reaction to this on-Board system of Boeing alert the crew about the dangers of voice command: “Caution! Wind shear” (Attention! The wind shear).

According to experts, near the surface of the earth a plane coming in for a landing under stable side wind, got in the zone is quite strong, about 20 m/s tailwind. The wind and began to “push” the car along the strip, providing regular flights touchdown at 1.3 thousand meters.

Kommersant’s source says that in the end, Boeing landed in the middle of a three-kilometer runway, even with inflated, about 340 km/h ground speed.

On the runway the plane did not stop — vacatures beyond it, the machine demolished the fence of the airport and fell into the river Mzymta. Boeing broke off landing gear and the left wing came off, the plane caught fire. From the death of the 166 passengers and six crew members rescued Mzymta carried away with the water burning kerosene, and rescuers, providing timely fire fighting and evacuation of victims. However, about 20 passengers were injured, died of a heart attack one of participants of suppression, and Boeing was completely destroyed.

According to experts, a sharp change in wind direction began for the pilots of the “unpredictable event”, which the crew was unable to cope.

To slow down the plane in the air the pilots could not translate it into a set of height — too. The fact that all the approaches in Sochi provided from the sea towards the mountains, so the refusal of landing at the altitude of less than 100 meters is considered too high-risk maneuver.

Another thing is that the decision of the commander of the crew about the landing seems to experts doubtful. On the night of September 1, when the accident happened in Sochi was declared a storm warning: there was a downpour that worsened visibility and traction with the runway surface, the WX was reported gusty winds and possible developments. According to the participants flight that night almost all arrived in Sochi, the aircraft stood in the waiting area or went to alternate airports, for example in Krasnodar.

The crew of the UTair meanwhile, as the participants in the investigation, initially “oriented to fit”. 15 minutes before the accident, the pilots tried to get into the other lane, No. 2 with a length of 2.2 thousand meters did not work. Directly in front of them tried to make a landing plane Air Baltic, but he was forced to go to the second round. The pilots of the Boeing nevertheless decided to go on a longer runway No. 6.

The experts should also assess to what extent the pilots used for braking the possibility of reversal of the engines of Boeing. However, POPPY had already circulated to Russian airlines a so-called primary report, which recommended their leaders to check the qualifications of the pilots on their knowledge of “the application of reverse after landing”.