Peskov told about a joint vacation to Putin, Shoigu and Bortnikov on the Yenisei 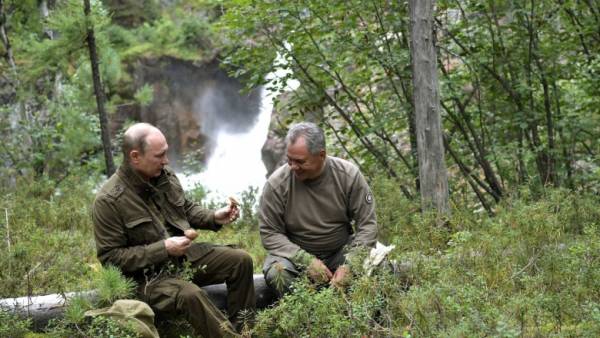 “Putin was like in the mountains, enjoyed the beauty. He was accompanied on this trip by the Director of the Sayano-Shushenskiy reserve, the head of Tuva, defense Minister Sergei Shoigu, FSB Director Alexander Bortnikov”, — said Peskov.

Putin is not the first time resting in Tuva. However, this time the President was not satisfied with traditional fishing, Peskov said. According to him, “it was scenic, natural tourism”. The representative of the Kremlin has promised to publish “some of the shots of the last weekend of the President.”

Last year in August, Putin also spent several days in Tuva, he was again accompanied by the native Shoigu. Then the President visited the remote taiga, where he was engaged in underwater hunting and fishing in mountain lakes.

In the summer of 2013 Putin on lake Tokpak-Khol caught a pike weighing more than 21 kg. “I Dragged her three minutes, it’s all fixed,” — told Putin later told reporters. Their catch, he explained that for hundreds of miles around was not a single living soul, and so even “a lousy fisherman”, as he was able to catch a fish.