In Russia are developing aircraft with vertical takeoff

MOSCOW, 21 Aug — RIA Novosti. In Russia, the draft of the new aircraft with vertical takeoff and landing, said Deputy Prime Minister Yuri Borisov at the opening of the military-technical forum “Army-2018”. He noted that on behalf of the President, the project was included in the state program of armaments. 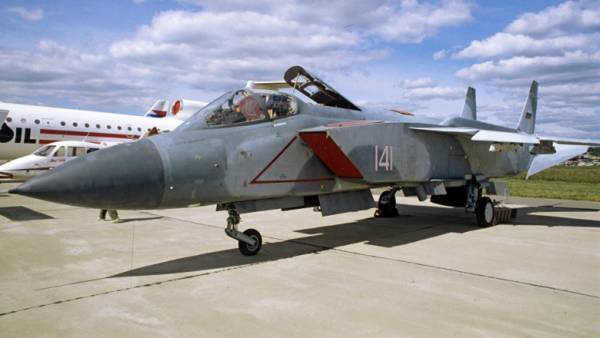 “We are working on a conceptual model prototypes. Of course, this is the future. For all types of aircraft carriers will require a new fleet of aircraft. For this various techniques are used, which allow for short takeoff and landing or vertical takeoff just. Conceptually, such work is conducted in the defense Ministry from last year,” he said.

According to the Vice-Premier, the timing of the establishment of the new aircraft are determined by the technological cycle.

In the Soviet Union has released from the aircraft vertical takeoff and landing Yak-38, which was adopted in 1977. These planes based on aircraft carriers cruisers project 1143 “Kiev”, “Minsk”, “Novorossiysk” and “Baku”, which sold abroad. To replace the Yak-38 was supposed to come the Yak-141, however, in 2004, the program was shut down.

That the work on creation of vertical take-off planes for aircraft carriers is already underway, Borisov said in November last year. Then he noted that the current MiG-29 and su-33 in ten years will become obsolete and will require the creation of new aircraft.

According to the military expert, captain of the first rank Konstantin Sivkov, this machine is vital not only to the Navy but also air force.

The main problem of modern aviation is that a jet fighter needs a good runway, and there are very few airfields to destroy them first shot is quite simple. The same aircraft vertical takeoff in a period of threat can disperse even in forest clearings. Such a system is the use of combat aircraft will possess exceptional fighting resistance.Konstantin Sivkov, the expert, quoted by RIA Novosti.

In addition, believes Sivkov, for the beginning of works on creation of the aircraft do not have to wait for a new aircraft carrier ships, as they can be based not only on aircraft carriers.

Convertiplane future prepared for the first flight on an aircraft

“For example, the tanker is equipped with a ramp and becomes a kind of aircraft carrier in the Soviet time we had such projects. In addition, VTOL can be used with warships capable of taking helicopters, such as frigates,” — said the expert.

The heliplane and “flying SUV”

In Russia, the go and other work to create aircraft with vertical takeoff. So, in early August, the rector of Kazan national research technical University (KNRTU) albert Gilmutdinov told about the successful test of an unmanned tiltrotor was developed by order of the Ministry of defence.