“In the midst of madness”: the bloody drama in which journalists have crossed the line

30 years ago the whole of Western Germany long hours was watching the development of the drama with capture of hostages, which began with an unsuccessful armed robbery and ended after 54 hours shooting on the autobahn and the death of two people. 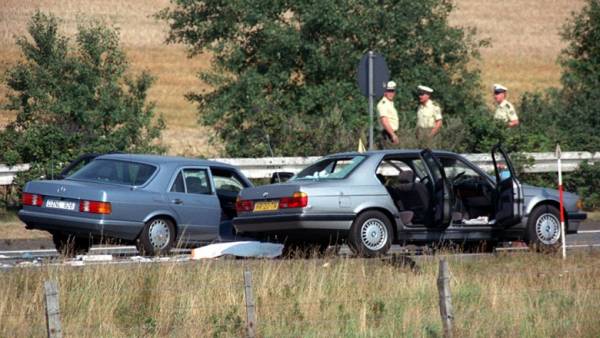 After the dust settled, there was a lot of criticism of the work of mass media during the emergency. At least one of covering the situation of journalists crossed the line of acceptable.

In February of this year, Dieter Degowski was released from prison. He’s been in isolation for 30 years for participating in a series of violent crimes that were committed before the eyes of the whole country.

So, what happened in the city of Gladbeck in August 1988?

In the national consciousness drama with capture of hostages in Gladbeck remains a great tragedy. Because killing two young hostage. Because the police let the situation get out of control. And because journalists find themselves in the thick of things, in fact only hindered the attempts of the police to peacefully resolve the crisis.

The situation in Gladbeck was new to the police and, of course, to the press. If this happened now, every journalist would have stopped to think that there are boundaries that can not be broken. But then we were in the midst of some madness.Udo Realizability editor of the Cologne tabloid “Express” in 1988 of the Robbery and hostages

It all began with a Bank robbery.

16 Aug 1988 Degowski and his partner Hans-Jurgen Rossner went to the branch of the Deutsche Bank in Gladbeck, in the Ruhr area of Germany. The robbers threatened the Bank staff weapon — customers in the branch was not. The police arrived within a few minutes.

After talks that lasted most of the day, the police agreed to provide two armed robbers car and several hundred thousand German marks. The criminals left, taking two Bank employees as hostages.

They drove randomly, at some point stopped to plant in the car girl Resner Marion Lieblich. The next day, early in the morning, they stayed in the suburb of Bremen.

In Bremen, after several failed attempts to catch car criminals seized a bus carrying more than 30 passengers. Journalists flooded the bus, some of them were taking pictures in the bus. Resner, gave an impromptu press conference in the street holding a gun in his hand.

In the end the bus went to Hamburg. On the way we stopped at the gas station, there were released two hostages, a friend of Risner Marion went to the toilet. At this moment were in confusion the police made a fatal mistake.

At the outlet of the toilet of Marion was arrested. Degowski in response issued an ultimatum: either let her go for five minutes or he’ll kill a hostage. The police did not fit into the allotted time, and Degowski shot to the head killed a 15-year-old Emmanuel di Giorgi.

The bus left the road and soon crossed the border with the Netherlands. There are criminals left the bus and boarded in the BMW provided by the German police. With them they took two passengers — 18-year-old Silke Bischof and her friend INES Voitle. About 7 a.m. the car came to the territory of Germany.

of the Massacre at mount Carmel. As the FBI struggle with the sect turned into a nightmare

Drama that developed virtually live, all the way Degowski and Rossner was surrounded by a crowd of journalists — has riveted the attention of millions of viewers. The performance was played live.

In Bremen covered with tattoos Rossner told reporters that he was going to end it all and put in my mouth the barrel of a gun.