NOVOSIBIRSK, August 21 — RIA Novosti. Dismantling the aboveground part of the former shopping and entertainment complex “Winter cherry”, where a fire in March killed 60 people, ended in Kemerovo, reported RIA Novosti on Tuesday the representative of the city administration. 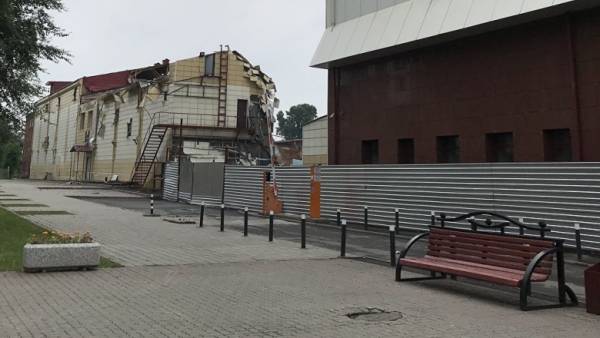 “In Kemerovo completed the dismantling of the aerial parts of the former shopping and entertainment complex “Winter cherry”. On the export of works specialized vehicles: 15 trucks, two excavators and destroyer” — said the Agency interlocutor.

The representative of the municipality noted that at the present time organized export and warehousing of metal.

Previously, the government reported that by 1 September in the place of the national memorial that appeared near the building of the shopping center in the first days after tragedy in “the Winter cherry” will be installed memorial stone and benches, the specialists will clean paving slabs. There will be a commemorative square, one of its elements will be a memorial art object, metal, cherry wood, forged by the blacksmiths of the Ural.

The fire in the shopping centre, “Winter cherry” was March 25 and claimed the lives of 60 people. The complex of buildings on Lenin Avenue with a total area of 23 thousand square meters, converted into a shopping centre from industrial sites of a confectionery factory, after PE admitted to the emergency. Mainly four-storey building was burned down structures, partially collapsed roof. In mid-July began preparations for demolition of the building, on July 19 began to work heavy machinery.