MOSCOW, 15 Aug — RIA Novosti. The President of South Korea, moon Jae-In said that is aimed at ensuring freedom of movement between the two Koreas and the creation of a single economic community, reports Yonhap news Agency. 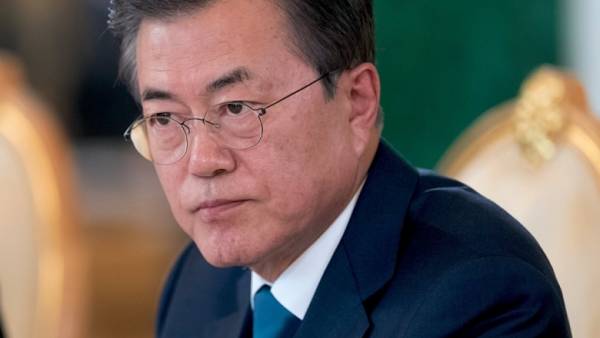 He added that “peace and prosperity on the Korean Peninsula is a promise that the two leaders made the rest of the world. “I hope that the complete denuclearization of the DPRK and the relevant US measures will be implemented,” he added.

As stated by moon Jae-In, integration with North Korea you can start with the creation of a “community rail North-East Asia”, which will include the six countries of northeast Asia and the United States.

Later in the office of South Korean President has said that six of these countries — the two Koreas, Russia, China, Mongolia and Japan.

“This community will lead to (forming) energy and economic bloc in northeast Asia by expanding our economic zone to the Northern continent and create the basis for coexistence and prosperity in northeast Asia,” said moon Jae-In.
He added that this will be the “beginning of multilateral security” in the region.

The South Korean leader said that the European Union started out as a simple Union in the field of coal and steel.

While moon Jae In stated, that full integration is possible only after complete denuclearization.

The junction and joint economic zone,moon Jae-In said that roads and Railways of the two Koreas is planned to connect to the end of the year.

In June, the two Koreas agreed to establish a joint working group to implement a modernization project on two sections of their Railways. South Korea not long ago joined the international Organization for cooperation of Railways that will allow it to connect their railway with the TRANS-Siberian railway via North Korea.

In 2003, the railroad of South Korea and North Korea have been connected for the first time in half a century of national division, but a change of government in Seoul and the development of nuclear weapons by Pyongyang led to the freezing of the project. In April 2018, the leaders of the two Koreas agreed to resume work on train connections South and North.

South Korea hopes through the TRANS-Siberian railway to deliver the goods to Europe, which while it is necessary to send by sea.

Also moon Jae In said that in the case of discharge, the two Koreas can establish in the border regions of Gyeonggi and Cansado the joint special economic zone.