Behind trump: how NATO conspired without US President

The final document of the NATO summit was agreed upon before it begins without a trump. 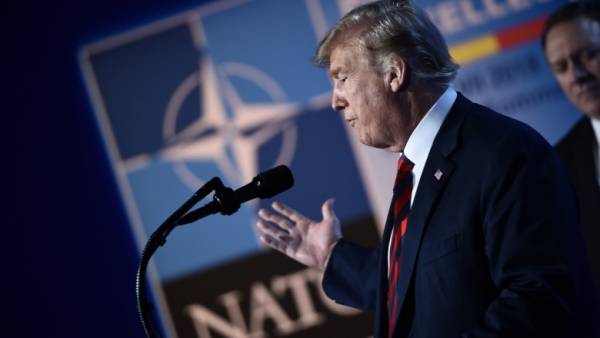 The final document of the NATO summit could be signed before the launch and without direct participation of the President of the United States Donald trump. Thus, American and European diplomats hoped to avoid a repetition of the scandalous G7 summit, when trump refused to sign the final communiqué. According to The New York Times, the initiator of the idea to agree on a document behind trump was his Advisor for homeland security John Bolton.

The final document of the NATO summit, which took place in Brussels 11-12 June, was agreed before the meeting. This writes The New York Times, citing the words of five unnamed us and European officials familiar with the discussions.

According to the newspaper, the document was agreed before the NATO summit at the request of the US presidential Advisor for national security John Bolton.

The publication writes that in June, a few weeks later, Bolton has sent its request to Brussels through the American Ambassador to NATO Kay Bailey Hutchison. He wanted NATO communiqué was completed ahead of schedule, before the trump will go to Europe.

In the end, NATO Secretary General Jens Stoltenberg agreed with the proposal of Bolton. The statement was prepared on July 6, five days before the summit, which prevented discussion between the leaders of the member countries of the Alliance.

Such measures have been taken by Bolton to avoid a repeat of the situation at the last G7 summit, when trump refused to sign the final document because of disagreement with partners.

Bright and unexpected actions trump at the summit on 8-9 July left his colleagues at a complete loss. He demanded to cancel all trade tariffs between the two countries, so nobody could accuse each other of protectionist measures and called the statements of canadian Prime Minister Justin Trudeau about offending the new duties of the United States “false”.

The main problem — in tariffs, which, according to trump, Europe uses to support its own business and limit the impact of competition from the United States. Canada’s position has only worsened the situation. Trudeau has promised to introduce a ‘mirror’ measures in response to the increase in American tariffs on trade in steel and aluminium from Canada.

In the end, trump in Twitter account announced that he would not sign the final communiqué. So he did. The next day France and Germany announced that, irrespective of the position of Washington will adhere to the outcome of the G7 summit. However, the situation did not become better.

It was to avoid such a scenario at the NATO summit, Bolton and sought preliminary approval of the document.

However, without the scandalous statements of trump at the summit of the North Atlantic Alliance is still not done.

Later, after the summit, trump even called into question the Central tenet of NATO’s “an attack on one member is an attack on the entire Alliance,” saying that he sees no sense in protecting such a small country as Montenegro. “It is unfair because they don’t even pay,” said trump in an interview with Fox News.