Meteorologist Roman Vilfand: any point of no return speech does not go yet

Some scientists believe that the climate will soon pass the “point of no return”, after which catastrophic changes on Earth will be irreversible. 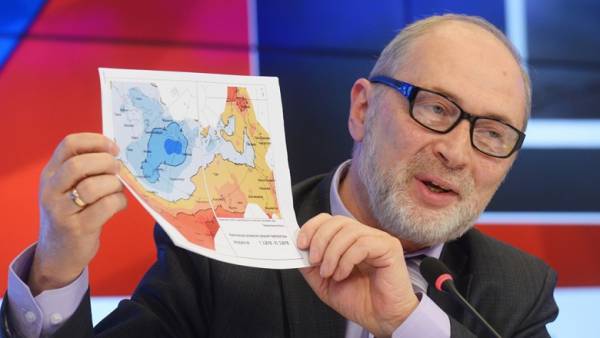 June 2018 was abnormally hot in many areas of the planet. Kept pace with him and July. Heat above +40 °C in the South of Russia, in Volgograd and Siberia. Fire disasters in Japan and Greece. And at this time in Antarctica, record cold: -98 °C! In Tyumen swept the strongest hurricane with the sandstorm, Istanbul was flooded due to rain, floods hit the TRANS-Baikal region, Stavropol, Krasnodar and Khabarovsk Krai. What is happening with the climate? Many scientists are sounding the alarm, counting his change is catastrophic and irreversible. Their point of view “AIF” stated the scientific Director of the hydrometeorological center of Russia Roman Vilfand.

Permafrost is already not eternal

to Sunbathe to the ground

Roman Vilfand: Summer in the South and South-East of the European part of Russia, Siberia, Yakutia really brought surprises. We hear that these temperatures not even remember the elderly. But, speaking in jest, in the elderly there are multiple sclerosis and memory loss. Meteorologists do not see in the current heat, nothing particularly outstanding. And very low temperature in Antarctica was recorded remotely by the remote sensing data from satellites. The minimum, marked by many years of observations by ground meteorological station is -89,2 °C. In the recesses of the ice shield of Antarctica can be almost -100 °C. However, in individual cases it is impossible to conclude that the Antarctica had turned cold.

— Climate scientists warn that between 2016 and 2035 the Earth’s temperature will increase by 0.7 °C, 2081 — 2 °C and will grow all XXI century. This heat wave is also a consequence of global warming?

— It is not excluded. According to scientists from the intergovernmental panel on climate change (IPCC), global warming during this century is inevitable. It is very slow, this is not a sharp jump in temperature across the Earth. But somewhere on this background, possible strong temperature fluctuations — both in one and in the other direction.

You need to take steps to warming will not exceed 1.5−2 °C — then climatic disaster will not happen. But if the end of the century this figure will reach 5.5 °C, will start the melting of continental ice.

— Conventional wisdom: once global warming, everywhere will palm trees grow including in Siberia, will disappear distinction between winter and summer.

is it Possible to assume, what will be the climate in 100 years?

— Change astronomical factors: summer is always warm, the winter is cold because the sun during these periods rises above the horizon at different heights. But weather will become more extreme and neurotic, often will be observed particularly low and high temperatures, extremely harsh and very warm winters, too hot, and cool, rainy summers. Somewhere there will be more floods, and somewhere will increase drought.

Most scientists came to the conclusion that the overall moisture content on the globe will not change. However, redistributed precipitation in temperate latitudes, their number will remain the same, but in the North has increased markedly, and in southern latitudes, including in the South of Russia, where precipitation and so often not enough for a good harvest, they will drop even more sparingly.

Less than the total warming effect in the tropics and near the equator because there is less land and the water surface. Water is the inertia substance, and the temperature is determined by the temperature of the ocean.

— They say in Russia, global warming is much faster than in other countries. Is that so?

— Yes, because Russia, in General, the North country. And for the zone of 50-70 degrees North latitude, the area of the continents greatly exceeds the ocean. Therefore, in temperate and Northern latitudes, the warming effect is stronger. On average on Earth for 10 years, the temperature increases by 0,17 °C, and in Eurasia is 2.5−3 times faster. Especially warming in the winter — such is the nature of the greenhouse effect. But the main problem for our country, the thawing of the permafrost layer. This concept ceases to have its value: if the permafrost is not eternal, it will change not only the climate but also the way of life in the Northern regions.