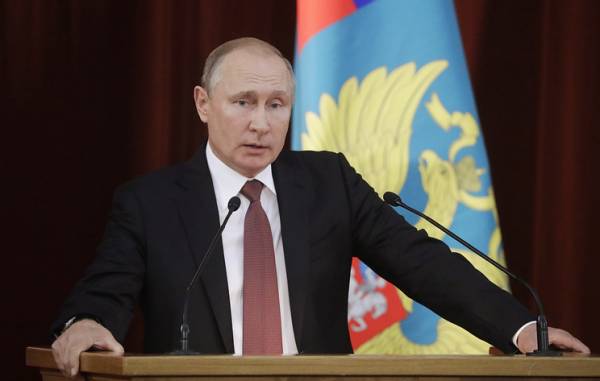 MOSCOW, July 19. /TASS/. Russia’s active participation in world Affairs is dictated by our main national interest – ensuring the most favourable, safe environment for breakthrough development of the country, addressing major social, economic challenges, improving the quality of life of Russians. This was stated on Thursday, speaking at a meeting with Russian ambassadors and permanent representatives of the Russian Federation, Russian President Vladimir Putin.

“Our citizens want to see Russia strong, independent, peace-loving state. We are open to partnerships, mutually beneficial, constructive relations with all countries and regional organizations”, – he stressed.

Putin also noted that “following international law, working collectively, we can solve the most complex problems of the world”.

The Russian leader, in his speech raised a number of issues that concern the entire international community, including the issue of settlement in Syria, the question of preservation of the agreements on the Iranian nuclear program, relations between Russia and the United States.

To solve the humanitarian problems

“In Syria, with the decisive role of Russia dealt a devastating blow to international terrorism, ISIL (formerly ISIS banned in Russia as a terrorist organization – approx. TASS) and other extremist groups.