The French air group mixed up the colors of its flag, flying over Paris

PARIS, 14 Jul — RIA Novosti. The famous French aerobatic team Patrouille de France, participated in the aerial part of the parade on the occasion of French national holiday — Bastille Day — Paris, mixed up the sequence of colors in the flag of the country. 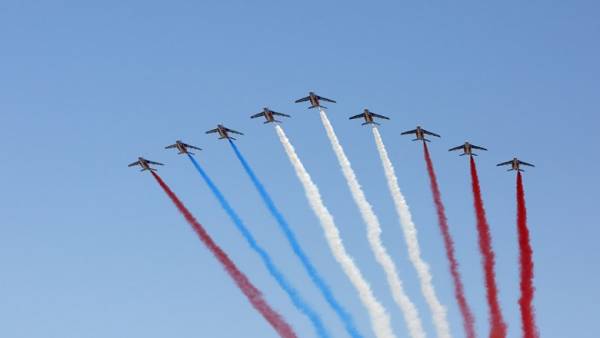 The French flag consists of three vertical stripes: blue, white and red. Strips of smoke, painted in the colors, aerobatic team, traditionally released into the sky over the main Avenue in Paris — Champs elysées. Just view the colors of the flag involved nine aircraft — three for each color.

But this time, the spectators watching the parade, saw that in the first place, the “blue” of the plane was the plane that released a red stream of smoke.

The incident with the colored smoke was not the only incident during Saturday parade. So, during the passage of the riders, two of them fell on the Concorde, very close to the stands, where sat the President of France Emmanuel macron and his guests. As a result of incident nobody has suffered, fallen riders, rising, returned to parade.

According to the BFMTV, the total participation in the parade on the Champs Elysees took 4 290 soldiers, 220 vehicles, 250 horses. In the sky above the city flew 64 aircraft and 30 helicopters.

On Saturday the President of Russia Vladimir Putin congratulated Him with the holiday.