MOSCOW, 22 Aug — RIA Novosti. The Ukrainian authorities dismissed the head of the portal RIA Novosti Ukraine Kirill Vyshinsky in the meeting with the Russian Consul. This was announced by the Commissioner for human rights under the President of Russia Tatyana Moskalkova. 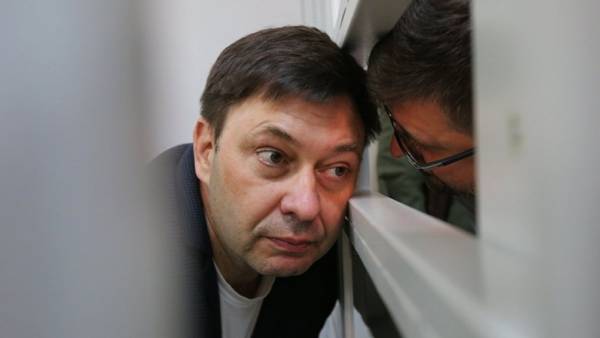 Moskalkova added that she has not yet received permission to visit the Russians in the Ukrainian prison, so to get to Vyshinsky’s not there yet. However, she added that he would ask his Ukrainian counterpart Lyudmila Denisov, to hold it to Vyshinsky, as well as the laws of Ukraine allow the local Ombudsman to take in the jail of the foreign visitor.

Earlier, the presidents Vladimir Putin and Petro Poroshenko agreed that the ombudsmen of the two countries will visit prisoners of Russians in Ukraine and Ukrainian — in Russia. Moskalkova was planning to visit Wyszynski on June 23.

Wyszynski was arrested may 15 near the house in Kiev on suspicion of treason and support of the DNI and LC. He faces up to 15 years of imprisonment.

Vladimir Putin called the situation unprecedented. The foreign Minister noted that it is arbitrary, Moscow has sent to Kiev a note of protest with the requirement to stop violence against members of the press. Also a rally in support Wyszynski was held in front of the Ukrainian Embassy in Moscow.