MOSCOW, 9 Aug — RIA Novosti. The President of Russia Vladimir Putin and President of Ukraine Petro Poroshenko in a telephone conversation noted the need for the immediate release of Russian journalists arrested in Ukraine, the press service of the Kremlin. 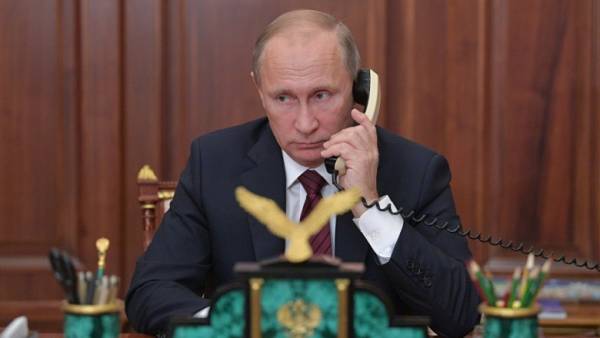 Employees of the security service of Ukraine may 15, burst into the office, where correspondents of RIA Novosti in Kiev, they carried out a search, which lasted about eight hours. At the same time in Kyiv detained the head of RIA news Ukraine Kirill Vyshinsky. He is suspected of supporting the breakaway republics of Donbass and treason. The court in Kherson on may 17 arrested Wyszynski of 60 days without possibility of bail. The defence appealed this decision in appeal court of the Kherson region, however, the court of appeal refused.

General Director MIA “today Russia” Dmitry Kiselyov said that the Ukrainian authorities should immediately release Wyszynski and to cease harassment of the media. Chief editor MIA “Russia today” and RT Margarita Simonyan believes that the incident is a place in Kiev for the Crimean bridge. However, she noted that the resource RIA Novosti Ukraine is not legally bound to MIA “Russia today”, but is a media partner of the Agency.

The Russian foreign Ministry called Kiev’s actions in relation to RIA Novosti Ukraine arbitrariness. As stated by the Minister of foreign Affairs of Russia Sergey Lavrov, Kiev’s actions against journalists, RIA Novosti Ukraine is unacceptable. The Russian Embassy sent to the foreign Ministry of Ukraine two notes with a demand to stop violence against the media.

Russian President Vladimir Putin said that Wyszynski was arrested “for his direct professional activities, for exercising his journalistic functions” and stressed that the arrest of Vyshinsky — “absolutely unprecedented and totally unacceptable policy of the current Ukrainian rulers, it should be appropriately reflected in the reaction of the journalistic community and international human rights organizations.”

He also expressed the hope that it will be possible to secure the release of Wyszynski, including by means of pressure on Ukraine in international organizations.

The OSCE representative on freedom of the media, Harlem Desir expressed serious concern about the actions of Ukrainian authorities in relation to RIA Novosti Ukraine in Kiev. He recalled that, “in accordance with the Helsinki final act, the participating countries of the OSCE have committed themselves to promote conditions that will enable journalists from one participating country to conduct their professional activities in another.”