“No tolls, no barriers — that’s how it should be”

Donald trump is extremely sharply reacted to the plans of the EU, Canada and Mexico to apply protective measures in response to the imposition of U.S. duties on imports of aluminum and steel. The American President firmly called for the abolition of all barriers in trade relations of the United States, making it clear that, ideally, would like to create a free trade zone in the framework of relations with the leading countries of the world. 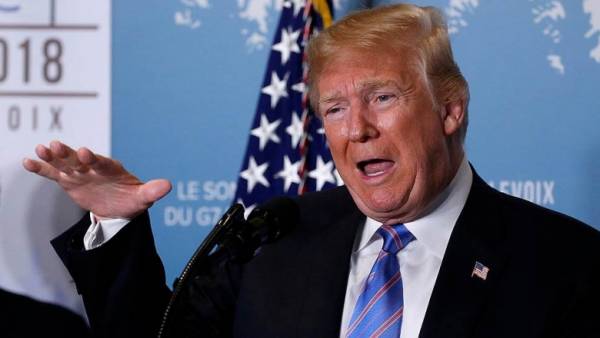 On Saturday held talks at the summit of the G7 (UK, Germany, Italy, Canada, USA, France and Japan) between the President of the United States Donald trump and the leaders of the member countries of “seven”. One of their key themes was the conflict that arose after the introduction from 1 June, the U.S. duties on imports from EU countries, Canada and Mexico steel and aluminum products in the amount of 25% and 10% respectively. The EU, as well as Canada and Mexico said in response on the response and protective barriers. The canadian foreign Ministry called the US imposed duties “illegal”, and the head of the European Council Donald Tusk said that the U.S. actions “threaten the foundations of world order”.

At a press conference following the talks, Donald trump spoke out sharply against those who has imposed counter-sanctions, and hinted that the talks were quite friendly and productive. He called the US relationship with the G7 “heart” and “deserves the highest evaluation”.

However, he, in fact, delivered an ultimatum to the partners: “I will blame them if they did not behave reasonably and will do what I must, because they have no choice.”

“No tolls, no barriers — that’s what it should be — and no subsidies… It would be the ultimate goal, I do not know if it would work or not, but I suggested it,” said Donald trump, in fact, proposing to create a zone of free trade in the framework of relations between the leading countries of the world.

He added that it is a model of a perfect trade financial is taught in universities. About the reaction of his companions to such a proposal Donald trump said.

The US President stressed that the actions of the former leaders of the U.S. led to the creation of trade imbalances, and reiterated that does not blame other countries in the emergence of a trade deficit, when the US purchased from them more than put. “It’s the fault of the people who came before me. And I’m not just talking about President Obama”, — he noted, adding that such a policy in the sphere of trade, the United States conducted for the past 50 years. “It gets worse and worse and worse,” — stated the President.