Putin signed the law of contracti

MOSCOW, June 4 /TASS/. The President of Russia Vladimir Putin signed the law “About measures of exposure to (counter) the unfriendly actions of the United States of America and other foreign countries.” The document adopted by the state Duma on may 22 and approved by Federation Council on 30 may, published on the official portal of legal information. 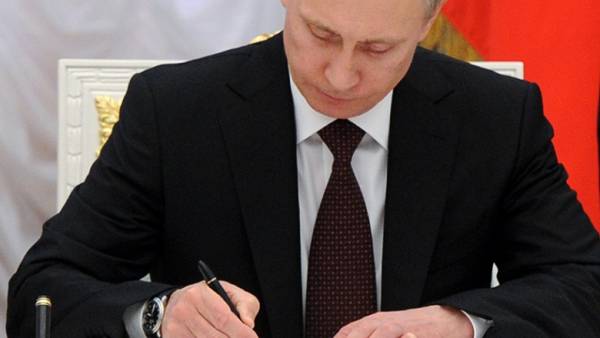 According to the law, the government by decision of the President of the Russian Federation will be able to introduce various countermeasures, but they should not apply for vital goods, if their analogues are not produced in Russia and other countries. Appropriate decisions can also be taken by the President based on the proposals of the security Council of the Russian Federation. At the same time, in case of elimination of circumstances giving rise to the imposition of counter-sanctions, the government cancels the appropriate actions (countermeasures).

Document April 13, was submitted to the state Duma by group of deputies led by the speaker of the lower house of Parliament, Vyacheslav Volodin. Since the introduction of the law in the state Duma around him a wide-scale discussion. The text was perceived ambiguously, expressed criticism on a number of provisions of the law.