MOSCOW, may 30 — RIA Novosti. Russian President Vladimir Putin on Wednesday appointed the new head of the Amur region, the former which Governor Alexander Kozlov has previously served as head of the Ministry for development of Russian Far East and Altai Krai. Both the acting was part of the presidential reserve of administrative shots. 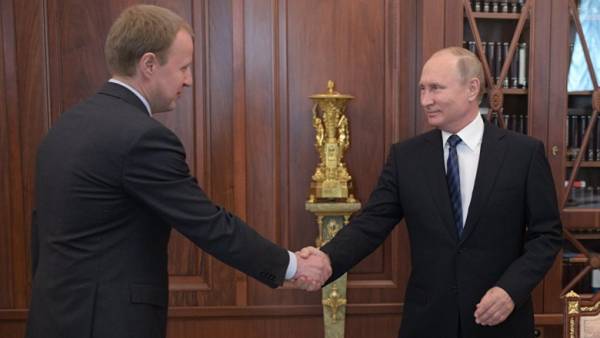 In the afternoon it became known that the Russian President has accepted the resignation of Altai Governor Alexander Karlin, who led the region for 13 years, and held a meeting with Viktor Tomenko, who will temporarily fulfil duties of the head of region. Prior to this appointment, stated acting first Vice-Governor and Chairman of the government of Krasnoyarsk Krai.

The government of the Krasnoyarsk region, which Tomenko headed in 2012, he was named a competent expert. “A qualified specialist. As far as I know, Tomenko was part of the presidential reserve”, — told RIA Novosti the representative of the government, commenting on the appointment.

And the Deputy of the state Duma from Krasnoyarsk region Victor Zubarev has told RIA Novosti that the stated well-versed in financial matters and human relations.

I think Viktor Petrovich Tomenko very professional and skilled specialist in the field of regional management. It is the longest worked on this post (Vice Governor, Chairman of the government — ed.) in our region. He is very well versed in human relations and financial matters. Tomenko is an intelligent and competent person. Altai Krai will benefit from this.state Duma Deputy from the Krasnoyarsk Krai Victor Zubarev

Political scientist Alexander Chernyavsky Tomenko called “professional Manager, well versed in the economy and the budget process.” “He deliberately shied away from public policy, not played undercover game and wasn’t involved in any scandals. Those who work with him, note the consistency in decision-making, diplomatic talent, sincerity and personal charm. A rare case not only for officials today, he knows by heart “Eugene Onegin” — described Cherniavsky, acting head of the Altai territory.

The expert believes that the new workplace with all the positive characteristics stated will not be easy, because the position of the Governor — political. “Tomenko going to have to get out of a technocrat Prime Minister public policy, and it is always a difficult process. I don’t think he will act rashly in personnel matters, but to get “their” strong first Deputy for politics, I would have advised him” — he said.