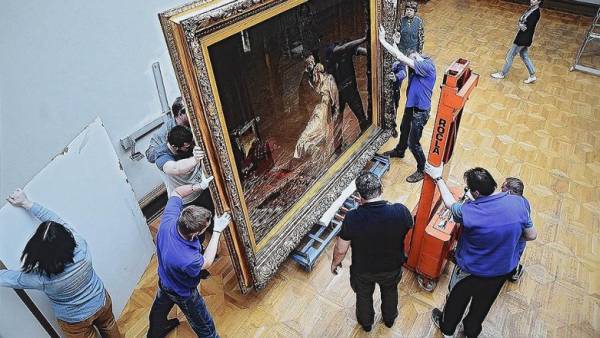 The state Tretyakov gallery has released details of the incident, which was damaged by one of the most famous paintings in the history of Russian painting — “Ivan the terrible and his son Ivan November 16, 1581” by Ilya Repin. At a press conference held in the historical building of the Tretyakov gallery in Lavrushinsky lane, the Director of the Museum presented a report on the incident, injuries and the future of canvas.

The briefing was opened by the Director of the Tretyakov gallery Zelfira Tregulova, set forth in detail the course of events that occurred the evening of 25 may. According to her, the attacker was in the hall of Repin alone, his behavior before the time of the attack was inadequate and did not attract much attention.

After asking the matrons to leave the gallery, vandal slowly headed for the exit, and then promptly turned around and struck several blows with stand fences on the glass. The caretaker came running when he heard the sound of breaking glass. Vandal was detained by the security personnel.This country Regulatorily Director of the Tretyakov gallery

40 minutes after the incident, the Museum has been the chief curator, the culprit was taken away, and the place worked three restorer of the highest qualification. Staff removed the broken glass, removed the picture, and after midnight, moved it to the restoration workshop.

The image remains visible damage in the center of the figure of the son of Ivan the terrible. According to the Zelfira Tregulova, the restoration of the painting will take several months.