Why the road the trunk, or As laid new asphalt in Moscow

Work on laying of new asphalt in the Russian capital is in full swing. They are held in dry weather from mid-April to mid-October. RIA Property joined to one of the road crews and asked about all the styling features of the road surface. 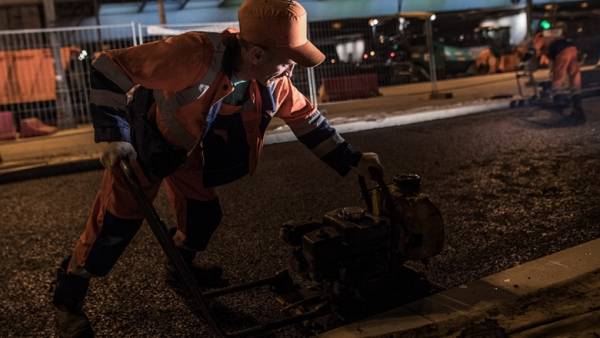 In Moscow there are two key programs paving — repair of roads, sidewalks, walkways, different floors, for example, a Parking overhaul in the framework of urban improvement.

The average life of asphalt is 5-6 years, and the warranty period of three years. “This means that three years after paving, undergoing tests. If the pavement were in good condition, he just lies there on, all subsequent inspections are conducted once a year. If the survey was unsatisfactory — on the road a lot of holes, cracks, then the asphalt is laid again,” — says the head of the production complex “Center of AB” GBU “highways” Moscow Oleg Kovalevskiy.

In General, according to him, the more car traffic on the road, the less life cover and Vice versa. “For example, Kosygin street, which runs along the hills, until this year, was repaired in 2012. The asphalt on the third ring and MKAD vary, of course, more often,” — said Kowalewski.

Replacement of asphalt in the framework of the current repair is carried out in two stages. First, milled, i.e., cut off the top layer — about two inches of fine-grained asphalt mix. Then the road poured asphalt emulsion, a kind of “glue”, then fit a new top layer, which immediately compacts the ice rink. The bottom layer is a coarse-grained asphalt-concrete mixture.

Now to increase the service life of the asphalt is applied the top layer with a larger “grains” of gravel to 20 millimeters. The fact that every year more and more increases the load on the road: increased traffic flows, people use winter tyres with spikes.