Why does Hawaii burn with a blue flame?

American geologists have found an explanation for the rare phenomenon, which is observed this week in the area of Kilauea volcano: the bands of blue flame bursting from under the Ground. 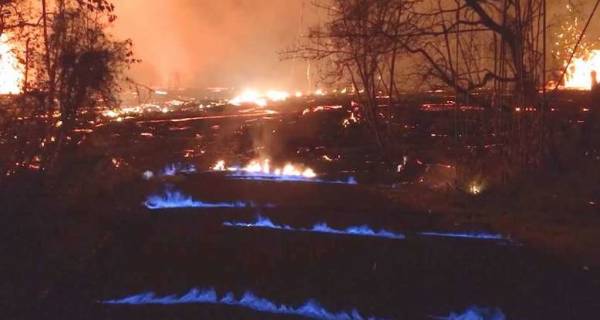 In Hawaii for almost a month, from may fourth erupts one of the most active volcanoes in the world — Kilauea. First bubble of magma has risen far from the Caldera, the fluid pressure provoked the formation of many cracks through which the surface of the Islands out of lava, including on the highways. For three weeks she destroyed two dozen homes and as many outbuildings, the residents were evacuated. In addition, the photos of the island made by the U.S. Geological survey, scientists noticed blue flames escaping from under the Ground.

The flame itself scientists explain the burning of methane, which is separated in the process of thermal decomposition of wood without oxygen. When lava flows covered the forest, the trunks and branches of the trees began to collapse, but not burn — under a layer of lava and stones had no oxygen and decompose anaerobically, releasing, among other products, methane. He hauls himself through the cracks in the ground, the gas ignites, because there is very hot. Bluish gas due to admixture of carbon monoxide; this gas gives a bluish tint flame home gas stove.

Gas can accumulate under the ground and explode as a result of increasing temperature and, consequently, of pressure; explosion can result in loss of life, fear of the power of the state of Hawaii. Meanwhile, from the eruption of Kilauea no one died or was hurt only one person — a man went to the balcony, got under the spray of hot lava and was hospitalized with burns.