“It is a tool of struggle with the sanctions regime”

Russian Academy of Sciences and the Crimean authorities intend to put the Peninsula on a scientific basis. 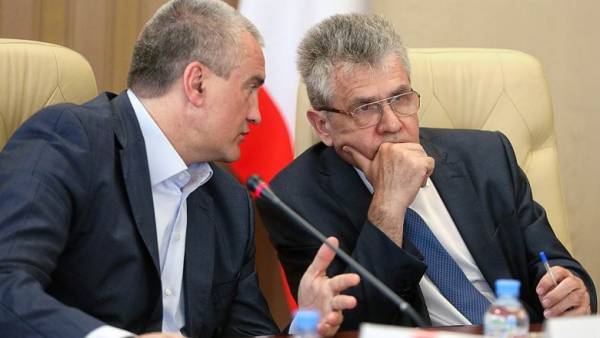 Russian Academy of Sciences and the Crimean authorities have prepared a draft scientific and technological development of the Peninsula. It is assumed that the RAS scientists will be engaged in dozens of activities: from finding new sources of water, oil and gas to address the problems of overcrowded landfills. Moreover, scientists promise to grow on the Peninsula “strategic reserve” of sugar beet seed, open the “anticyclonic” archaeological complex and to create the all-Russian center for the treatment of children. At the start of the program will require approximately RUB 7 billion, say the academics, but after the selection of projects “that amount will need to be clarified”. Preparation of “road maps” will take a month after that the head of the Crimea Sergey Aksenov and the head of RAS Alexander Sergeev will work together to “protect the project” the President of the Russian Federation.

The draft programme for scientific and technological development of the Crimea presented in Simferopol at a joint meeting of government delegations of the RAS leadership. President of RAS Alexander Sergeev stressed that the full integration of the Peninsula is impossible without participation in large-scale scientific projects.

But the Crimea, frankly, important to the Academy not only because of the special political situation. The region actually charged to move forward in science and technology.Alexander Sergeevitch wounds

“Our collaboration will yield concrete result in dozens of directions,” confirmed the head of the Crimea Sergey Aksenov, adding that he had already discussed the issue with the leadership of the country.

Vice-President of RAS Valery Bondur began with main objective to solve the problem of water supply of the Peninsula that escalated after 2014, Ukraine shut the North-Crimean canal. Water supplies are going to search using multispectral space shooting.

First will identify the areas of groundwater. Then sent by helicopter complex “Equator”, which generates waves of different lengths and finds the source. “The system created under the scientific direction of the Institute of water problems of RAS, — said Mr. Bondur.— It has been used repeatedly in the African region, recently sought water in Rwanda.”

The next priority direction — finding on the shelf of the Crimea deposits of hydrocarbons. “The needs of the Peninsula in the gas close to 60% — said Vice-President of the RAS. Now there are 1.7 billion cubic meters of gas, and need roughly 2.8 billion”. Using satellite imagery and acoustic locators, the Academy will monitor coastal waters for exploration, “oil and gas manifestations.” According to him, this offer has interested the Ministry of natural resources, “Chernomorneftegaz” and the relevant University of oil and gas named after Gubkin.

The third project is the solution to the garbage problem of the Crimea. According to scientists, the official 30 landfills are already overflowing with waste “and exciting new area”. On the Peninsula found about 200 illegal dumps, but most likely there are many more. RAS is going to look for them from space, and then “to develop proposals to eliminate”.

“Most of the polluted waters of the Peninsula, are under increasing anthropogenic load, — he said.— The main source of pollution — municipal and domestic wastewater”. As an example, he showed fresh satellite imagery of urban runoff Sevastopol, “shows that the discharge does not occur in 2 km from the coast, as expected, but only 800 m”. Vice-President of RAS said that Russian scientists have already accomplished this monitoring by the authorities of Honolulu (the Hawaiian Islands).

Vice-President of the RAS Nikolai Makarov told about the project of the Kerch archaeological complex: “a True mega-project that allows to conduct scientific research and at the same time increases the tourist attraction of the Peninsula.” The scientist lamented that in Russia, museology develops separately from science: “If here we will be able to combine them, you get important for the whole country precedent.” “This project has reported to the President of the country, — said the head of RAS Alexander Sergeev.— Under it is possible to get a good research laboratory and fill them with the equipment in the country just yet”. In turn, Sergey Aksenov stated that the archaeological complex, attracting foreign scientists, is “a tool of struggle with the sanctions regime”.

Project for the treatment of children was presented by Vice-President of the RAS Vladimir Chekhonin: “In Russia, a growing number of children who are disabled. On January 1, 2018 them there were 651 thousand, and more than a third of them under the age of seven years. The relevance is obvious.” The Academy offers to create in Crimea a multi-center rehabilitation treatment 1.5 thousand children. “We had a meeting with our experts in medicine, surgery, they are all ready to join this work”, — said the scientist.

Now “total bed capacity” of all children’s health resorts of Evpatoria is about 4 thousand seats. “But some of them we are forced to close,” acknowledged Mr. Feldman, because of aging infrastructure and “no download”. Mr. Chekhonin complained that the subjects of the Russian Federation “often prefer to learn to trust funds for the rehabilitation of children within their own regions, which does not always entail achieving the desired effect of the treatment.” He proposed to enshrine in legislation that the Federal government allocated funds to regions for treatment of children only with the condition to perform such a treatment in the Crimea.

Acting Director of Institute of agriculture of Crimea Vladimir Pastecki proposed to include in the program “strategically important” project for farming on the Peninsula of sugar beet seeds. “Russia produces 50% of sugar beet in the world, but the seeds we are totally dependent on Europe and the world, — he explained.— If someone wants to give us the seeds, 1.2 mln ha, we’re just not going to be able to sow”. According to him, in case of approval of the program of the Crimean scientists will be able to solve the issue “for two years”.

“In the next 30 days we should prepare a “road map” of implementation of the program distribution areas, with assignment of responsibilities, — said Sergey Aksenov.— We then Alexander Mikhailovich (Sergeev.— “Y”) go to the President of the Russian Federation, to protect the project and ask for support.” The Russian Academy of Sciences said that the total cost of running the entire programme is “about 7 billion rubles”, but “after the preparation of specific projects this amount will need to be clarified”. Note that 7 billion requested by the RAS, and 4% of the expenses of the Crimean budget (174 billion rubles in 2018), or 5.3% of all gratuitous receipts in it from the Federal budget for the Federal target program socially-economic development of the region (131 billion). In a branch cut the proposed amount is comparable to all expenses of the Crimea on “culture and cinematography” (5.7 billion rubles in 2018) or half of the budget of regional expenditures on health care (15.7 billion roubles).