Chinese airliner A-319 made an emergency landing after windshield in the cockpit burst at an altitude of nearly 10 km, While the second pilot almost pulled outward flow of cabin air, but he was able to save. 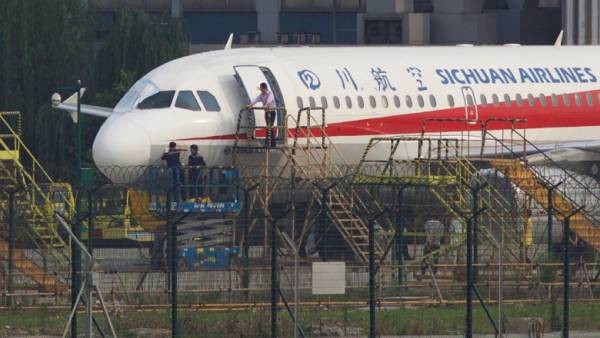 The crew commander Liu Cozzani reported that glass breaks instantly, without any warning, with a terrible crash at a time when the aircraft was at cruising portion of the route to Lhasa from Chongqing.

The glass suddenly cracked, and there was a deafening clap. And then I saw my pilot sucked into the cockpit window.Liu Kunszentmarton crew

Fortunately, the co-pilot was wearing a seat belt. He managed to drag back to the cabin, where chaos reigned as a result of depressurization.

“Everything in the cab flew into the air became very cold, — says the commander. I didn’t hear the voices of dispatchers on the radio because of the terrible noise. The plane vibrated so much that to see the readings was impossible.”

Flight 3U8633 Chinese airline Sichuan Airlines was in the middle of the road, and the passengers just carried the Breakfast to the moment when the aircraft fell sharply to a height of 8000 meters.

“We didn’t know what was going on, and aboard began to panic, told the Xinhua news Agency, one of the passengers. — Above the seats dropped oxygen masks… and a Few seconds the plane was in free fall, but then it failed to align.”

During the download an error has occurred.Emergency landing of an airliner

The civil aviation administration of China announced that the second pilot escaped with minor injuries — he’s got a sprained wrist and cuts of the face. Another member of the crew in the cockpit, got bruises in the lumbar region result in a sharp loss of height plane.

The plane managed to make an emergency landing at the airport in Chengdu.

None of the 119 passengers were not injured.

About 27 people underwent medical examination at a hospital in Chengdu. Then more than 50 passengers were transferred to another plane that day arrived safely in Lhasa.

The hashtag #ChinaHeroPilot scored 160 million visits and 17.8 million reviews. Many require the immediate award of the commander, others Express dissatisfaction with the lack of security measures.

Aircraft manufacturer Airbus and the French BEA expert Agency, investigating accidents, are sent to China their professionals who need to understand what had happened.