Media: Iranian parliamentarians set fire to the US flag and the contract AGREEMENT

In the country’s Parliament has called for a “mutual and proportionate” action in response to the decision of the United States. 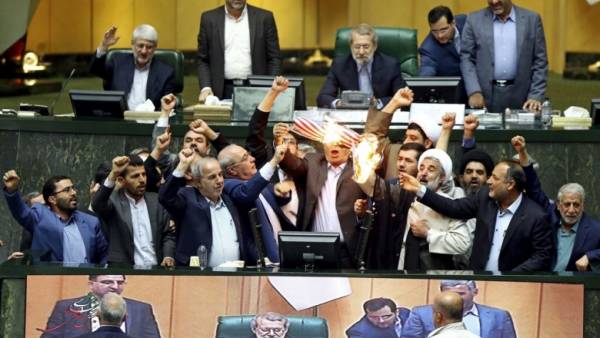 TASS, may 9. Several Iranian parliamentarians set fire to the U.S. flag and a copy of the agreement on a Joint comprehensive plan of action (SVPD) on the Iranian nuclear program in protest against Washington’s decision to withdraw from this agreement. This was reported by the Agency Tasnim.

According to him, it happened this morning in the open session of the Parliament. As informed by Reuters, the Iranian Parliament has called for a “proportionate and reciprocal” action from the government in response to the U.S. decision.

Trump on may 8 announced the release of Washington from the agreement on the Iranian nuclear program deal, which imposed limitations on the activity of Tehran in the nuclear field in exchange for the lifting of UN security Council sanctions and unilateral restrictive measures imposed earlier, the US and the EU.