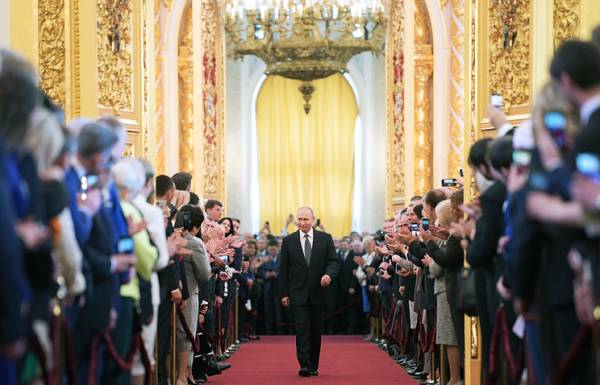 The President of Russia Vladimir Putin at the inauguration ceremony

During the inauguration ceremony, the Russian President made a speech, calling the thesis “Russia is for the people” as its key priority and promising to do everything for the present and future of the country. As highlighted the inauguration of the world’s media at TASS.

The Washington Post: “today, Putin completely dominates the political system of Russia. His popularity soared after the annexation of Crimea in 2014. Many Russians took this step as a signal to unite around the Kremlin, despite a confrontation with the West. For the supporters of Western sanctions, accusations of Russian interference in American elections, doping scandal nothing more than attempt to humiliate their country.”

ABC: “After the ceremony the oath of office, Putin said that Russia is facing historic challenges and the country needs a rapid progress in all areas. Noting the achievement of reliable support for the defense needs of the country, he stressed the need of economic development of Russia and ensure the development of democracy in the country…