The extension group of the fifth generation

The defense Ministry has deployed su-57 in Syria. 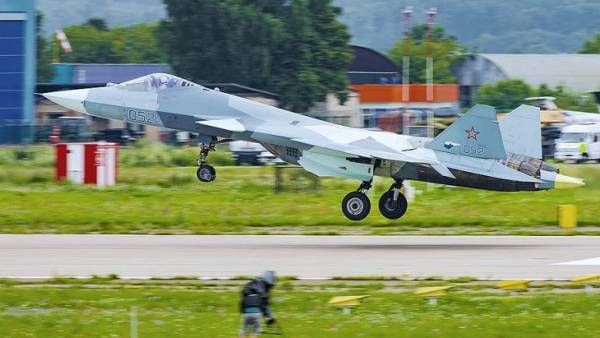 On the eve of defender of the Fatherland Day, the Ministry of defense of the Russian Federation sent to the base Hamim several su-57, which are developed since the beginning of 2000-ies, but not yet adopted. According to “Kommersant”, it is not so much about the strategic strengthening of the Russian air group, as the desire of the military and industry to test the car in conditions close to the fighting. And also to demonstrate opportunities of the defense industry and show the best side of Russian military action in Syria.

Last week Syria had sent several pieces of promising aviation complex tactical aviation (PAK FA), su-57, this fact Kommersant confirmed several sources in the defense industry. Interlocutors “” has told that the car was brought in two passes. Initially, images of fighter jets coming in to land in Hamima, appeared on Twitter, according to unofficial information, in Syria, sent four su-57. According to one of interlocutors of “Kommersant”, the machine was relocated in the framework of testing of weapons systems fifth generation fighter aircraft, which began in the summer of 2017.

According to “Kommersant”, in Syria, the su-57 would be to test EW systems and radar, but full-fledged combat use.

The KLA comment on the question “Kommersant” about sending su-57 in Syria: “We are in this story, no.” The defense Ministry left the official request “b” no answer. Multipurpose fighter of the fifth generation su-57 is developed by the Sukhoi design Bureau. It is equipped with a new set of highly integrated avionics system, has a high level of automation, control and intelligent support of the crew. Development began in 2001, the first test flight conducted in 2010. In August 2017 he has received factory index su-57, and in December made its first flight with the new engine.

According to a source””, close to the war Department, a decision in principle about sending su-57 was made following a private screening of airplane at the air show in Zhukovsky. “Given the stated test program, the defense Ministry decided to send fighter to Syria in February, in conjunction with all formally to the Day of defender of the Fatherland”, — said the interlocutor of Kommersant.

The first stage of state tests was completed, the second phase is scheduled for completion in 2019.

Then, as previously reported by “Kommersant”, the Ministry of defence will conclude with the Corporation “Dry” contract for the first squadron of su-57 (12 aircraft). According to Deputy defense Minister for armaments Yuri Borisov, during development work as many aircraft and built 10 of them are involved in the trials and the first two of this party can do to the troops in 2018.

As reported in an interview with “Kommersant” Deputy Prime Minister Dmitry Rogozin, the first phase of testing allowed “to confirm the correctness of accepted decisions in terms of airframe, avionics, ensuring systems and equipment, aircraft weapons”. And in 2019, according to him, the military will have an installation party to connect to the test program. As the Vice-President of the Russian international Affairs Council, the General-Lieutenant Evgeny Buzhinsky, is now undergoing experimental combat operation of the machine.

Obviously, it was deemed appropriate to su-57, as well as the other aircraft passed baptism of fire in Syria.Eugene Burinskiene-President of the Russian international Affairs Council, the General-the Lieutenant of a stock

He said that the number also corresponds to the current realities: it is unlikely that it was made more planes, that is, “elementary was sent to all that is.”

The head of the Center for analysis of strategies and technologies Ruslan Pukhov believes that in order to send the su-57 in Syria for several reasons. “First of all, we are talking about the planned trials and tests. The car needs a battle tested,” — said the expert. According to him, there is a reputational point: successful use in Syria can give a new impetus to the development of the project FGFA. “From the point of view of the operation of videoconferencing in Syria, in sending su-57 now, there is no need, however, to talk about the use will be only according to its results”, — concluded the expert. In August 2017, the Deputy defense Minister Yuri Borisov reported that the military tested in Syria more than 600 weapons.