Cossack count and the father of the Russian artillery: the Museum of the history of the heroes

From the war with Sweden before the great world — five of the capital’s museums tell of their heroic items. 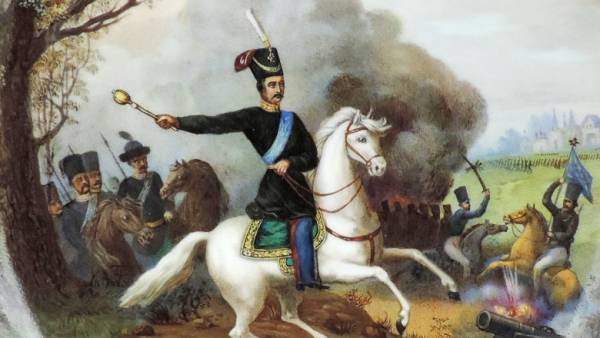 Museum collections keep many exhibits connected with the names of the great generals of the past and the heroes of the wars. On February 23 mos.ru together with the Agency “Moscow” tells five stories shared by the staff of the Museum of history “Lefortovo”, the Museum of V. A. Tropinin and Moscow artists of his time, the Museum “Kutuzovskaya izba”, the Moscow literary Museum centre of K. G. Paustovsky’s Museum “History of tank T-34”. Their heroes — the legendary military leader Alexander Suvorov, hero of the war of 1812 the Earl of Cossack Matvei Platov, as well as a descendant of the Scottish king, James Bruce, who became the father of the Russian artillery.

In the Museum of history “Lefortovo” is one of several valuable exhibits related to one of the closest associates of Peter I — the great statesman, military leader and scientist Jacob Bruce. Performing various errands for the king, he repeatedly visited Europe, he was familiar with Isaac Newton, Edmund Halley, Gottfried Leibniz, Leonard Euler. In the history of Russian military Affairs James Bruce is known as the father of the Russian artillery.

The Bruce — a famous Scottish family. They ruled Scotland, the greater part of the fourteenth century, giving the country the first independent king in its history — Robert I the Bruce. Three hundred years later, during the civil war in England, Bruce was on the losing side of the royalists and was forced to flee to Russia. So in 1647 in the service of Tsar Alexei Mikhailovich was the father and grandfather of Yakov Bruce. Jacob and his brother Robert began his military career at Queen Sophia, having participated in two Crimean campaigns under the guidance of her favourite Prince Vasily Golitsyn, but during the Streltsy uprising both supported the young king.

After participating in the success of the Azov campaigns of 1695 and 1696 years of Peter I James Bruce went to Europe, where he studied the coinage, shipbuilding and astronomy. When he returned, he was installed in the Sukharev tower the country’s first astronomical Observatory. Scientific activities brought Bruce national glory mage and warlock, which was reflected in the works of Russian writers of the romantic period, for example in the novel by Vladimir Odoevsky the Salamander and the unfinished novel by Ivan Lazhechnikov “the Sorcerer at the Sukharev tower.”

During the Northern war with Sweden Jacob Bruce had to leave science and to return to the army: he participated in the capture of Noteburg, Nyenskans and Narva, in the battle of Kalisz. During the battle in the Forest, which Peter called “the mother of the Poltava victory”, General-Lieutenant of artillery Bruce commanded the left flank of the Russian troops, and in the battle of Poltava under his command fought the entire Russian artillery. The head of the diplomatic mission, which was meant to signify the end of Northern war, became also James Bruce in 1721 he set his signature under the peace Treaty of Nystad, under which Russia gained access to the Baltic sea and rooted in the new territories.

Through the efforts of James Bruce in the Russian Empire there was a single system of calibers, marked the beginning of mass production of guns and nuclei. A descendant of Scottish kings worked on the improvement of gunpowder, the invention of new gun carriages and the scale of sight, which is called “brusovo”. When the artillery was divided into field, regiment, siege and fortress, has established St. Petersburg team (the prototype of mobile horse artillery) — in fact, the artillery became an independent native troops.

After the death of Peter I James Bruce resigned and retired to estate near Moscow Glinka. That the Bruce had once been kings of Scotland, reminded him of the motto of the clan on the arms and personal seal — “We were” (lat. Fuimus).

In the picture of brilliant Russian portraitist of the late eighteenth century Dmitry Levitsky captured 56-year-old Alexander Suvorov. Renowned General there is not too much like yourself, to be exact — on the order of Suvorov, what we are accustomed to imagine. Do the eye and hand failed academician of the Imperial Academy of arts recognized master of the ceremonial portrait?

Perhaps our concept of the appearance of the famous commander does not correspond to what he was actually, because no one knows how tall was Suvorov — not kept any of his uniform, not to mention accurate image.

Artists General posed reluctantly, the actual portraits can be counted on the fingers, and the authors often were painters of the second and third row.

In 1786 Levitsky has received an order for a series of portraits of the knights of the order of St. Vladimir, founded by Catherine II in 1782. Suvorov was presented to the award was one of the first in the summer of 1783 — “for joining different peoples of the Kuban to the Russian Empire”.

In the portrait there are only two awards: the above-mentioned order of St. Vladimir of the first degree and the order of St. George of the second degree, granted to Suvorov for the capture of the Turkish fortress Turtukay. Awards and titles for victories at Focsani and Rymnik, the capture of Ismail and Warsaw, the heroic Swiss campaign he will get later.