To give birth and raise a billionaire: the rules of life mother’s Elon musk

Mayan Mask of the joy of life, children’s order and the color of their hair. 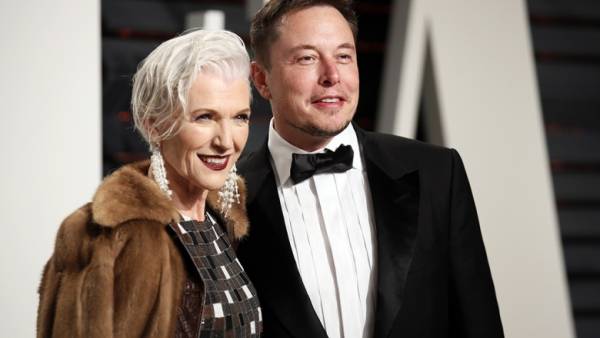 In April 2018 it will be 70, and she still goes to the podium. She’s the face of the advertising companies Clinique and Revlon, the face of the airline Virgin America, and 69 years signed a contract with cosmetics brand CoverGirl. And she gave birth to and raised three children: the eldest Elon — founder of PayPal, Tesla, SpaceX and member of the Forbes list with a fortune of $20.8 billion, Kimball — restaurateur (Café Kitchen) and philanthropist (the Big Green), the daughter of Tosca — producer and Director, whose painting of Hollywood Dirt showed in Cannes-2017.

When Ilona was 17, and daughter 15 Longing, they wanted to move to Canada where I was born. I said “no” because he was going to get his doctorate in Johannesburg. Besides, I had many job offers. While Elon was away, Melancholy sold a house, a car and held a rummage sale in the garage, so on return I had only to put his signature on the papers. I had no choice. In Toronto we started life with a clean slate.

After the divorce, I left South Africa in Toronto, Canada.

I was left alone with three children and absolutely without means of subsistence. I cried when the kids spilled the milk because I had no money to buy them a new batch.

My funds have been frozen in South African banks. It was government policy to stem the flow of emigration. In Toronto we were in a shabby rented apartment and for three weeks they washed her, that it was possible to live. Longing still remembers the day I broke a nail, “Mom, if you’re going to ruin the arm, you can’t be a model, so how are we going to pay the rent”?

How I managed to give children an education? I used their contacts to get their take on all sorts of work, so for the tuition they paid themselves. Besides, they always won scholarships at the University. They very early became independent.

Time which I now live, I call a time of great emotions. Never had so much attention to women my age. When I go to the podium, I can feel the positive vibes of the room.