More and more Russians consider February 23 with a holiday the military, learned sociologists

MOSCOW, 21 Feb — RIA Novosti. The defender of the Fatherland day is increasingly perceived among Russians as a holiday the military, and not men in General, according to a survey by the all-Russia centre of studying of public opinion (VTSIOM) at the disposal of RIA Novosti. 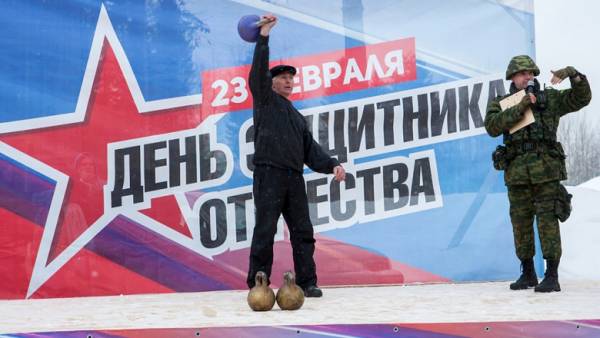 According to the survey, the defender of the Fatherland Day today is increasingly perceived by the Russians not the day of men in General (34%), and in the afternoon all troops (39%). In 2005-2006, the holiday on February 23 was considered more masculine by the day (46% and 42%, respectively) than during the day soldiers (32% and 31%). About the Decree on the establishment of the workers ‘and peasants’ red army, as 12 years ago, and today, remembers almost every fifth Russian (19%).

Commenting on these figures, the General Director of VTSIOM, PhD Konstantin Abramov noted that the defender of the Fatherland Day in the last time was for the Russians “is not a holiday of all Russian men, and acquired the accent that is close in meaning to its name”.

The survey also showed that 39% of Russians believe that the army, fulfilling a defensive function, in varying degrees, influence the development of society and economy. Slightly more than a quarter of respondents believe that it plays a key role in the development of all spheres of life, another 24% of survey participants said that the army is primarily a tool to protect the state from external threats. They believe that this tool does not affect the society, although for the last three years this share has decreased (from 34% in 2015).

The survey was conducted on February 17-18, the method of telephone interview among 2 thousand respondents. The statistical error does not exceed 2.2%.