Criminal case about plunder of 45 million rubles in the construction of the new scene of the Maly drama theatre opened on the initiative of the Ministry of culture, said the head of the Ministry Vladimir Medinsky. 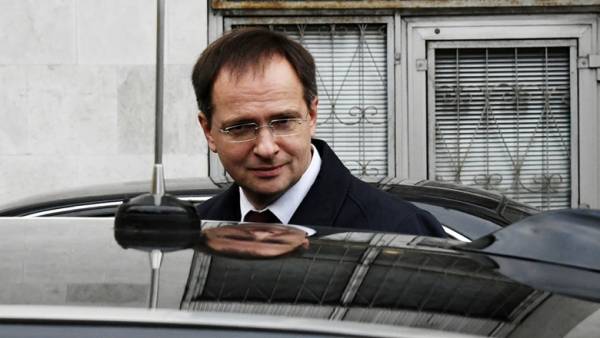 “We will continue the filth to pull out”, — the Minister added.

At the same time, Council members complained that “the news is only about the theater.”

“The news about the theater — the old-fashioned, while the theater, fortunately, in this case nothing to do has not,” commented Medina.

“There’s just the whole responsibility will lie entirely on the contractor. Cheated. Rogues,” said he.

According to him from the Ministry of culture was organized by the North-Western Directorate for construction, reconstruction and restoration, which “was a party to the conflict” that the Ministry “strongly supported”.

“But we are a theatre from the blow fully brought out in this history,” said Medinsky.

As reported, on Wednesday it became known about excitation of criminal case upon plunder of 45 million rubles allocated from the Federal budget on performance of works on designing of the new scene MDT. According to the FSB management across Petersburg and Leningrad region, proceedings were instituted under article 159 of the criminal code “fraud”. In the organization of misappropriation of funds is suspected.

Meanwhile, as reported “Interfax” a source familiar with the investigation, the stolen funds intended for payment of works on designing a new stage, could go to the purchase of luxury items, expensive vehicles and real estate.

The construction of a new scene MDT must be completed by the end of 2019. The total area of new buildings needs to reach 23 thousand square meters, underground Parking 1.6 thousand sq. m. Novacane theatre of Europe will be a seven-story. In the structure of the new complex will appear in the transformer stage with 600 seats, a chamber theater with 75 seats, three rehearsal halls, technical, warehouse, office and other premises. The total amount of the contract exceeds 2 billion rubles.

Maly drama theatre, the artistic Director of which for over 30 years is a people’s artist of Russia and laureate of several state prizes of Lev Dodin, was created in 1944 in Leningrad. In different years at the theater staged performances directed by Yury Dvorkin, Henrietta Yanovskaya and Kama Ginkas. The decision of the General Assembly of the Union of European theatres in 1998, MDT has the status of Theatre of Europe. The theater building is located in the center of St. Petersburg on Rubinstein street.