The scientist told about the size of the Chelyabinsk meteorite

CHELYABINSK, February 13 — RIA Novosti. A meteorite that fell in Chelyabinsk region in 2013, helped to calculate how much meteoroid lose your weight while entering the atmosphere, it was also revealed that before the fall he was the size of a six-story house, said Tuesday geologist, author of the book “Meteorite Russia” Sergei Kolisnichenko. 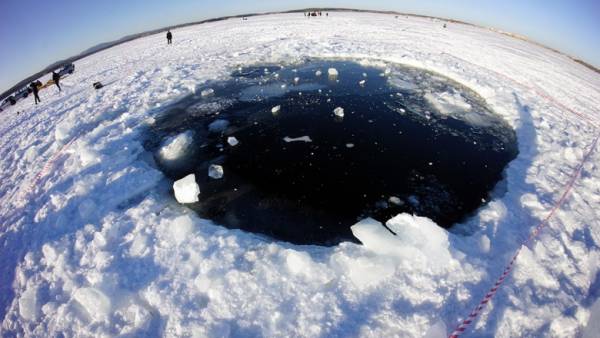 A meteorite fell into the Chebarkul lake on 15 February 2013, witnessed its passage in the sky in the form of fire outbreak were residents of the Chelyabinsk region and nearby regions.

“Chelyabinsk meteorite entered the Earth’s atmosphere at an angle of 18 degrees. Flies a six-story house, on the path of 100 kilometers from the earth is seven thousand tons disappear into dust, flying two tons. What happened? For the first time, calculated that a second flight in the atmosphere in such path the meteorite loses up to 200 tons of its substance. Fall he was two, say, seconds earlier, he would have a completely different weight,” — said Kolesnichenko at a press conference in Chelyabinsk.

He explained that this figure was never obtained for other meteorites, because the scientist was not known how much enters substances into the atmosphere.

At a press conference the Professor of the Department of theoretical physics, Chelyabinsk state University Sergei Zamozdra, the original meteoroid was about the size of a six-story building, at altitudes below 45 km the meteoroid began to splinter into fragments, and each fragment into still smaller fragments, the field of dispersion of fragments in the end, stretches for 80 kilometers.

According to him, for the first time scientists were presented for study a large number of Supervisory material, including video recorders, information from satellites, eyewitness accounts, and, most importantly, found in the lake, a meteorite fragment.