Of a pilot shot down in Syria, the su-25 Roman Filipov on Thursday, 8 February, buried in Voronezh. This was reported on the website of the Ministry of defense of Russia. 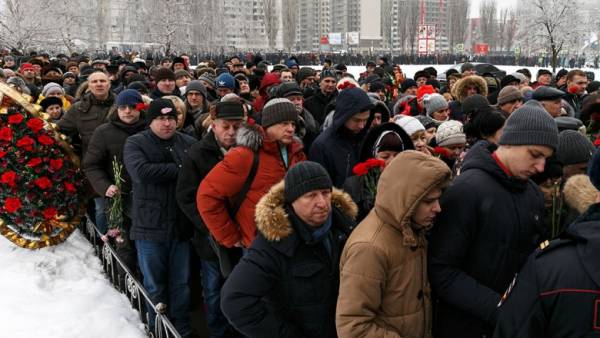 A farewell ceremony for the victims was held in the House of officers of the Northern military town of Voronezh. As reported by RIA Novosti in the Department of internal Affairs across the Voronezh region, to say goodbye to the Hero of Russia reached more than 30 thousand people.

The defense Ministry said that in the ceremonies were also attended by state Secretary — Deputy defense Minister Nikolai Pankov and the chief of Air and space forces (VKS) Russia Colonel General Sergei Surovikin. “I am deeply convinced that his name will name streets, schools, aircraft,” — said during the ceremony, punks, noting that Filipov was “a true citizen, a man, a pilot with great prospects.”

After the service of a pilot with military honors was buried in the Alley of Fame on the Kominternovsky cemetery.

Earlier on Thursday a farewell ceremony for Filippovym was held at the airfield near Moscow Chkalovsky. The mourning event was attended by the Minister of defence of Russia Sergey Shoigu. After the ceremony the coffin with the body of major has contributed to the Il-76 aircraft, which flew in Voronezh.

Russian su-25 was shot down in Syria during a standard task of patrolling. Major Roman Filipov ejected and took the fight. After a while he blew himself up with a grenade to avoid capture. Before the explosion, the pilot shouted: “It is for you boys!”. President Vladimir Putin awarded him the title of Hero of Russia.

Responsibility for attack was assumed by the terrorist group “Jaish al-Nasr”.