“Criminal” for a child: the organizers of the rally faces a new punishment

The HRC is preparing amendments to the criminal code. 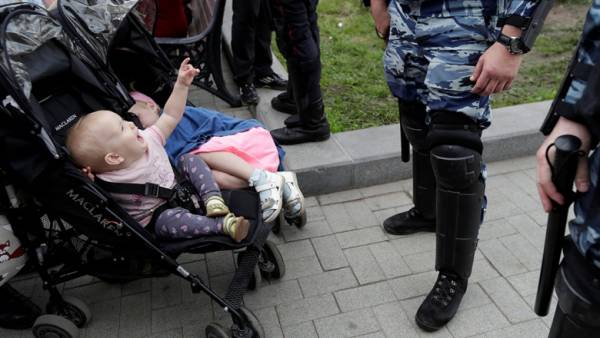 The organizers of unauthorized rallies involving children can be held criminally responsible. Such a conclusion can be drawn from the new initiative of the presidential Council on human rights.

The Chairman of national anticorruption Committee Cyril Kabanov has proposed to extend the concept of the criminal code “involvement in criminal activities”, replacing the word “criminal” with “illegal.” Thus, according to him, it will be possible to punish the ideology of the community of A. U. E. (the prisoner’s way is one. — Note. «Storms.)»

“We need to change legislation to prohibit the activities of certain Internet resources that spread this ideology, where children are recruited. I initiated, while there is discussion about changes to the criminal law. We have in the current legislation kriminalisierung the concept of “involvement in criminal activities”. I think we need to extend this concept and to speak of “involvement in illegal activity”, — said Kabanov.

However, such broad language gives grounds for bringing to responsibility for participation in unauthorized actions. Himself Boars does not exclude this possibility.

“If we are talking about illegal activity in the Criminal code, it is impossible to say that “it is possible to involve”, and in the criminal subculture of A. W. E. — not. The consequences can be even on the same unauthorized rallies. This is my position. People who encourage minors to such actions, probably, should bear the responsibility in case there will be some heavy consequences, even before his arrest”, — says Kabanov.

It is unknown what kind of punishment can be discussed, but under the current wording of the Criminal code, involvement in criminal activity of minors is punished with a term of five to eight years of imprisonment. However, a member of the HRC does not exclude that the interpretation of the concept of “unlawful activity” should give jurists.

International lawyer Timur Marani believes that the involvement of children in rallies is not a crime, for it can not be held responsible nor the parents, nor the organizers. Besides the fact of engagement still need to prove, and the world practice knows such punishment.

In the countries of people’s democracy rallies, meetings, marches, picketing is expression of the people. This is one of the fundamental democratic principles. The participation of minors in a concrete mass protests is a criminal offence, in particular in France. But it’s not called “involvement in criminal activity’ is ‘ illegal activities aimed at creating mass disorder.Timur Marseilles-international

According to Marchany, the development of such legislative initiatives must make a clear distinction between democratic will and riots. If the first is allowed, the second is harshly punished in the West and the East. France, USA, Israel and Syria firmly rejected any attempt to hold inconsistent “gatherings” as they are called by the French legislators. The Israeli army and the defense does has a reason to use the weapon, if the child is a threat.

Such a reaction, according to Marchany, formed on the background of the serious riots that pose a threat to the constitutional order and national security. This and the protests in France in 2005, when the youth because of the death of two teenagers of North African origin month pogroms in the cities. In Israel, the basis for a strong reaction was the use of children in the Gaza strip for terrorist purposes.

“People who are manipulated by the children, must bear criminal liability. I do not consider the option when the kids do go to meetings because I think they engage. It’s business and if it is not propagated, the children would have had no part in this. They do not enjoy voting rights. And they (the manipulators) need weight. Why do they need children? Someone listening? They understand something?”— outraged member of the public Council, honored teacher of the RF Maya Pildes.

The proposal to impose a penalty for the participation of children in rallies does not first time. In October last year with the similar initiative the Ministry of internal Affairs. Then the head of the main Directorate for combating extremism of the MIA of Russia Timur Valiulin offered to punish parents and educational institutions. In his opinion, the Council on human rights had to consider the relevant amendments. Earlier the same position was expressed by the Chairman of the Federation Council Valentina Matviyenko, saying that children should not participate in unsanctioned protests. In the state Duma Committee on family, women and children though not know about the initiative of the HRC, support the idea.

Children cannot be engaged in political activities. Children need to educate, to teach kindness, to fight against all sorts of scams that predispose them to suicide. And to involve them in political activity is prohibited, those who do, mess do.Tamara Planevideoart Of The State Duma

To discuss these initiatives began last year Navalny rallies. Inconsistent event, held March 26 in 26 cities, has become the most massive in 2011. Then the press talked about the participation of a record number of students. The position was confirmed by press Secretary of the President Peskov, who said that they can not “respect those who consciously mislead minors”. Official statistics on the participation of schoolchildren in stock nobody is going.

Later on the site the Bulk of the published an article titled “Hairy students”. In it, the opposition team analyzed the traffic to the pages devoted to the rally, and came to the conclusion that juveniles there were less than 7% and most of them there were people from 21 to 30 years (45.5 per cent). However, already on 12 June, Moscow authorities said that the stock of the Bulk of the 150 detainees were 136 children. Considering how actively the Bulk is trying to distance itself from this category of protesters and how active he is credited with its power, participation “shkolota” in meetings is not simply a matter of choice.

Storm tried to know the opinion of the opposition about the initiative Kabanova, however, neither Navalny nor his press Secretary, Kira Yarmish, nor Ilya Yashin, nor the leaders of the youth protest movements did not answer the calls.