Regional leaders, politicians and business representatives will hold a series of workshops and exchange experience with the participants. 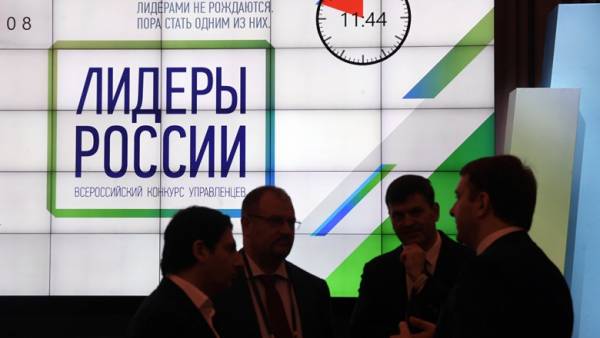 Participation in the final of the contest “Leaders of Russia”, held in Sochi, confirmed the 39 mentors, including governors, representatives of the presidential administration, state Duma deputies and Federation Council members, executives of public and private companies, and the rectors of Russian universities. They will hold a series of workshops and exchange experience with the participants.

At the final stage of the competition will be attended by the heads of regions: the President of the Republic of Tatarstan Rustam Minnikhanov, the Governor of the Kaliningrad region Anton chief Executive officer and the mayor of Moscow Sergey Sobyanin.

From state officials to participate in the final competition announced by first Deputy head of presidential administration of the Russian Federation Sergey Kirienko, the Minister of foreign Affairs of the Russian Federation Sergey Lavrov, Minister of economic development Maxim Oreshkin, and also the first Deputy Chairman of RF government Igor Shuvalov.

In the final of the contest “Leaders of Russia” went 300 people from 54 regions of Russia. Each of them will receive a grant in the amount of 1 million rubles. In addition, during the final stage will be selected 100 winners who within a year will be a mentoring programme, and will also get the chance to work in the leadership of public authorities and companies with state participation.