The pilot took the fight to the ground

On Saturday, the defense Ministry confirmed the loss of the su-25SM in Idlib province: the plane, carrying out a reconnaissance flight was downed by a portable air defense missile system (MANPADS). 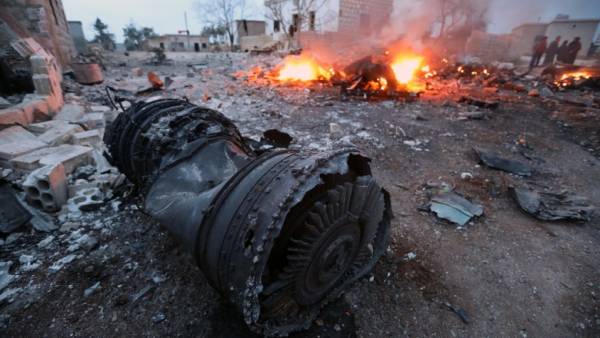 Pilot guards major Roman Filipov managed to eject from the burning car, but were surrounded and killed during a shootout with a shot down the machine fighters. The answer came a few hours: first square which housed the Islamists, was fired cruise missiles “Caliber” and then the Syrian forces and the Russian air force began to sweep the territory. They are committed at any cost to take the fighters body major Filipov.

On first time operation of the Russian Federation in Syria, the loss of the su-25SM it became known on 3 February — this is with reference to the Syrian monitoring centre for human rights told the AFP news Agency. Subsequently information was confirmed in the defense Ministry, adding that the pilot was able to eject, but was killed already on the ground in “the battle with the terrorists.” The responsibility for what happened took on two groups: “Hayet Tahrir al-sham” (the former “dzhebhat an-Nusra”, banned in Russia) and “Jaish al-Nasser” (located in the “free Syrian army”).

According to “Kommersant”, the major Roman Filipov in conjunction with the second su-25SM standard was performing a combat mission: patrolling the Syrian province of Idlib, for insurance reasons the flight was carried out with full ammunition. According to the military, the incident occurred after the execution of the task: when you make a maneuver at a fairly low altitude (about 4 thousand m) engine attack aircraft hit by a rocket fired by militants from MANPADS. The car received serious injuries, but major Filipov, who had a big plaque on the su-25SM, trying to keep the car in the air.

Soon the situation became critical following the failure of the engine failures started with the control system, so the pilot, as they say his colleagues, took the only right decision: ejected. Saw the white parachute, the militants opened fire from small arms, but in such conditions, the pilot managed to land, to find shelter, to gain a foothold on the point and report your location search and rescue service on Mamimi.

Of the weapons he was just a Stechkin pistol with several clips and a hand grenade. Once in the environment, he shot back as he could (according to some, he managed to shoot two of the attackers), but when the situation became hopeless, major Filipov blew himself up with a grenade.

According to “Kommersant”, the lost pilot will be submitted to a high state award — perhaps even the title of Hero of Russia (posthumously).

The first reaction to the incident was immediate. Within a few hours the area where the plane was shot down, was fired precision missiles “Caliber”. According to the defence Ministry of the Russian Federation, based on radio intercepts of militants during the operation were destroyed at least 30 radical Islamists.

After that, as, citing sources, said the Chairman of the Duma Committee on defense Victor Vodolatsky, the site of the destruction of the militias began to work the Syrian special forces and the Russian air and space forces (VKS) covered the operation from the air.

According to “Kommersant”, in the days of aviation, based at the airbase Hamim, caused more than 60 strikes on Idlib.

In the Arab social networks, information appeared that the Russian attack aircraft attacked targets in the area of Sarakibe (included in the area of de-escalation Idlib), but the military deny this.

This is the first loss of the su-25SM since the beginning of operations in Syria.

Experts raise questions the fact that the flight of attack aircraft at such low altitude, and a rocket of MANPADS “Igla” can hit targets at altitudes up to 5 thousand m

One of the interlocutors “Kommersant” suggested that flight altitude of su-25 was related to the fact that Turkey has promised to guarantee security in this area. It controls the area of de-escalation of Idlib. “When developing the flight task could rely on it,” says Kommersant’s source. Until the last moment information about the presence of militants MANPADS has not been confirmed, but now the aircraft will have to take into account this circumstance, says military expert.

Retired Colonel Viktor murakhovski emphasizes that to work for such a small and extremely low altitudes, the Russian VKS only started with operations in Deir ez-Zor. While the Pentagon stated that “the United States did not put the partner forces in Syria any weapons of the type “earth-air” (for example, MANPADS.— “Kommersant”), and do not intend to do so in the future.” To verify this information, the Russian military will be able only after the Syrian fighters will find at least one of the complexes from the militants and will study it, said a military expert.

Equally important is the return of the body of major Filipov. This work usually involved in the special forces of the defense Ministry or foreign intelligence Service. “In the case of dead people bargaining, agreement is reached quickly”, — said the interlocutor of Kommersant.