The U.S. Congress in the coming days needs to obtain two documents that will form the basis for another possible tougher sanctions against Russia. This so-called “Kremlin report” with the new list of citizens and companies in respect of which it can impose restrictions, and assessment of the impact of sanctions against sovereign debt and derivatives, Russian Federation. And although in themselves the two reports of direct sanctions not suggesting they create a large-scale risk and will seriously complicate the life and work got in the documents of individuals and legal entities. 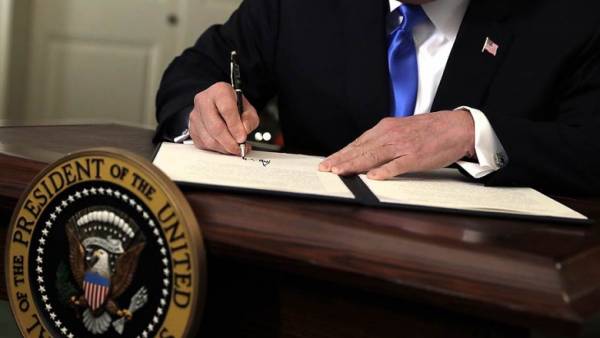 In the near future the administration of U.S. President shall submit to Congress two reports on Russia provided by the law “On counteraction to opponents of the United States through sanctions” (CAATSA). This is a report about officials and businessmen close to President Vladimir Putin, and “parastatal companies” with close ties with the authorities, and a report on the feasibility of expansion of economic sanctions against Russia. Signed by the President of the United States Donald trump 2 August 2017 CAATSA left the administration 180 days for preparation of documents. The deadline is 29 January, and American officials have so far assured that they will fit into it. In government agencies, States and now do not rule out a hitch, then the two reports or one of them will be presented later.

For both documents are the responsibility of the U.S. Treasury, were involved in the work of the state Department and U.S. intelligence agencies. The mechanism of the publication of the reports is likely to be different from cases where the U.S. government has imposed sanctions against Russia. Sanctions lists are always published on the website of the Ministry of Finance. At this time the Department must submit the documents to the relevant committees of both houses of Congress (on international Affairs, financial services etc). It is expected that reports will be released without a stamp, but they can be classified application.

What to do with the documents, will decide the Congress — they can either publish immediately or to report at the special event, or simply “merge” in the media.

The uncertainty around the reports connected with specifics CAATSA, developing which, the Congress for the first time intercepted the Executive initiative in the area of sanctions policy. Approved by the absolute majority of the votes of the legislators (voted for by 419 members of the house of representatives against three senators and 98 against two) document puts Russia on a par with Iran and North Korea. It seriously complicates the process of removing the already imposed us sanctions, but allows us to dramatically tighten them. Congressmen call CAATSA the US response to the intervention of Russian special services in the American presidential election and Moscow’s actions in Ukraine and Syria.

Donald trump criticized the original CAATSA, stating that the document limits its room for manoeuvre in the sphere of foreign (including sanctions) policy.

However, to veto it, the President did not: for such the consolidated support of the bill, the congressmen would easily overcome a veto.

About the innovations of the so-called “Kremlin report” can be seen from article 241 CAATSA. It assumes that the document will be identified as “the most important high-ranking politicians and oligarchs in Russia, defined by their closeness to the Russian regime and their net worth”.

The congressmen wanted to know about “the links between these individuals and President Vladimir Putin or other members of the Russian ruling elite”, any “corruption schemes to which these persons could be involved,” alleged net equity and the known sources of income of these persons and members of their families, as well as on business interests outside the Russian Federation. In addition, the report should include information on the “parastatal companies”, including information about their role in the Russian economy, the owners, beneficiaries and assets abroad.

Us officials privately emphasize that we are not talking about new sanctions, it’s just a report for the needs of the Congress.

Meanwhile, in article 241 says that the congressmen want to know what could be the consequences of the introduction of restrictions in respect of the debt securities of the above-mentioned “parastatal companies”, as well as from any of those entities to the sanctions list (SDN) Office of foreign assets control (OFAC) of the U.S. Treasury.

Moreover, congressmen are interested in the possible effects of the introduction of “secondary sanctions” against Russian businessmen, state companies and “semi-state” structures. “Secondary sanctions” imply that punishment can be subjected to cooperating with Russian citizens and businesses, natural and legal persons from third countries. Study of the effect of sanctions and visa or financial — in relation to entrepreneurs and companies the law does not require.

Not the congressmen and insist on the study of the effects of sanctions in relation to “senior political figures”. We are talking about the former and current senior officials in the Executive, legislative, administrative, military and judicial areas, “senior party figures”, top managers of state companies and members of their families and close persons.

Former chief coordinator for sanctions policy, US Department of state expert Washington Atlantic Council Daniel fried explained “Kommersant” that hit in “Kremlin report” does not automatically mean the imposition of restrictions. “I believe that the figures of the list are not immediately confronted with the practical consequences — for example, financial. However, the fact of being included in the list increases the risk that in the future against the defendants will be sanctioned, he said.— In the law (CAATSA.— “”) Does not say that the report will form the basis of new sanctions list. But I’m not going to hide the fact that many members of Congress would like to use it that way. In the end it could happen. It is quite likely. In this regard, I understand why Moscow is now a little nervous”.

In Moscow do with the tension waiting for the promulgation of the “Kremlin report” the Kremlin and the foreign Ministry immediately declared readiness to enter a response.

And according to the media (particularly the Bell), lawyers and lobbyists of big business for a few months make in Washington efforts to prevent the inclusion in the report of the names of their clients. The most dramatic statement about the impact of the report made on the sidelines of the world economic forum in Davos, the head of VTB Andrey Kostin. According to him, if the United States continues to impose sanctions against Russia, it will signal a “Declaration of economic war»:

I see no reasons why then the Russian Ambassador should stay in Washington.Andrew Castiglia VTB

According to the Kommersant’s sources in Washington, “Kremlin report” may be more than 50 Russian citizens (and family members up to 300). Recently a former senior state Department officials told “Kommersant” that according to his information, in the administration of the President of the United States to the last debate: “a Number of experts advocated that the list was a compact point, others wanted to include more names.” Officially, the contents of the report, the state Department has not commented.

Partner at Herbert Smith Freehills Alexei Panich said that the publication of the “Kremlin report” is a “preliminary stage”, with the aim to give a signal to hit him “about the need to adjust their participation in the Russian policy”. “Until now, OFAC immediately subjected to sanctions. Now, however, the inclusion of certain persons in the so-called “Kremlin report”, in the opinion of Congress, should warn them about possible risks,” — says the lawyer. Although the direct legal consequences of the inclusion in the preliminary list, continues Alexey Panich, in fact they are “obvious and malicious”: everyone will know that this person can from day to day to fall under sanctions, and therefore their contact is minimized.

At the same time, the lawyer is convinced that most of the potential defendants, if they have or had assets in the United States, has already taken the necessary measures to minimize the risks and be ready to input constraints.

However, not all experts are so hard to assess “the Kremlin report.” According to the former adviser on Russia to President George W. Bush, managing Director of Kissinger Associates Thomas Graham, the document may be including the names of those who are already under sanctions, and the new restrictive measures “will not necessarily follow.” “In this case, no significant changes will occur, though the defendants report, previously not included in the black list, most likely, will suffer some reputational loss in the West — he explained “Kommersant”.— If Washington will just make lists and will not take other measures, the state of bilateral relations will depend on how Moscow will respond”.