The President accustomed to being watched. 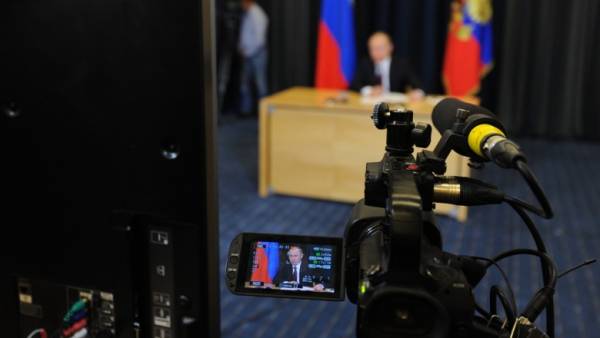 YUZHNO-SAKHALINSK, January 1. /TASS/. The President of Russia Vladimir Putin admitted that before working on the main post used that for him all the time watching, but does not like to appear on the TV screen.

He took part in the anniversary issue of “Time”, which is January 1, turned 50 years old, and answered leading questions about how he feels in front of television cameras.

Putin did not name, when he first appeared in the news, but remembered that, “working in Petersburg… started giving interviews, I began to meet with journalists, there’s even something to harm such a small film Igor Shadkhan shot at the time”. “That’s what I remember because he was very interesting person is Igor Abramovich Shadkhan”, — explained the President.

According to him, he then began to appear in the news, “when I arrived in Moscow, began to work in the presidential Administration in the Control office, then became Director of the Federal security service”.

For some current specific issues some information from me was coming from, but I never really… loved. Yes, and I can’t say that now love.Mr Putinprime of the Russian Federation

He answered negatively to the question, straining his presence of the camera.

“It’s not that strained or not strained. The fact that it wasn’t until that time a part of my life. On the contrary, I still tried to be a little so not a public person”, — said the head of state.

“Strangely, no,” replied the President to the question, I had to give up some habits because of the almost constant presence of journalists. “Why? Because she [life, work] really mean, but in my former life all the time tried to behave like me… always watching. So that’s weird, but it happened. May be due to previous profession. But… but to say that that’s something I had to radically change, perhaps not,” — said Putin.