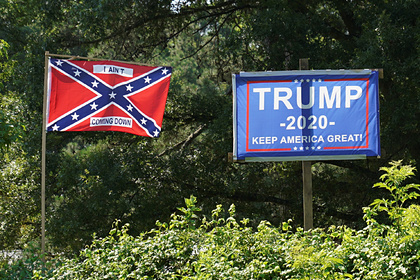 The President of the United States Donad trump stood up for the flag of the Confederate States of America, which many people consider racist. He said this live on CBS.

In late June, the American Governor of Mississippi Tate Reeves spoke about the intention to change the state flag containing the symbols of the Confederacy of the southern States. According to him, state legislators for several days to discuss the concept of a new flag, but to success they never came. The Governor noted that the task of uniting the people of this state, standing in front of him, even harder than fighting the coronavirus or the consequences of tornadoes and floods.

In the period from 1861 to 1865 in the United States there existed a Confederation of the southern States. During the civil war, which lasted from 1861 to 1865, there was a collision between the North and the slave South, confederates. Southerners lost the war that led to the abolition of slavery and servile work. Despite this, southern States were some symbols of the Confederacy. Many Americans consider it a manifestation of racism, however, the proponents of the symbols and names relating to Confederate, state that it is an integral part of U.S. history.