Member of the Federation Council of Karachay-Cherkessia Rauf Arashukov was detained within criminal case about the murder in 2010 of the Deputy Chairman of the regional youth movement “Adyge-Khase” of Aslan Zhukov and presidential adviser of the Republic of Frala Shebzukhova, the message of the Investigative Committee of Russia (TFR). During the investigation, the obtained data about the involvement Arashukova to these crimes, said the Investigative Committee. 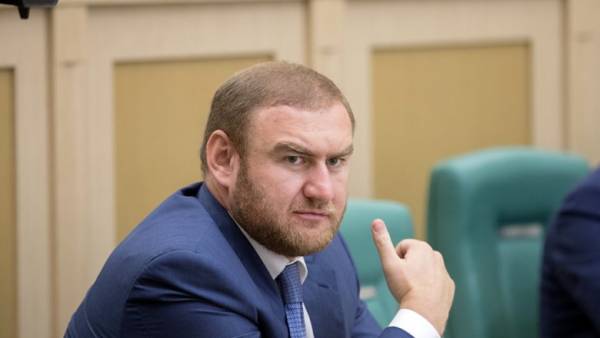 Arashukov was arrested on Wednesday morning right in the courtroom of the Federation Council. As passed by the Agency TASS, the plenary of the chamber before it suddenly closed from the media, and the entrance to the hall was blocked by the staff of the FSO. “Interfax” the press service of the chamber reported that the senators want to discuss in closed session organizational matters.

According to the source TASS, participated in the meeting, behind closed doors the members of the Federation Council heard the Prosecutor on the lifting of immunity of a Senator and have given their consent, and then Arashukova “detained and taken out of the room”.

According to a source “Interfax”, reported on this issue to the senators, the Prosecutor General Yuri Chaika, was also attended by the Chairman of the TFR Alexander Bastrykin, and one of his deputies.

Arashukova accused of several crimes, including organizing a criminal group, said the source TASS. “There’s a whole bunch of charges,” he said.

The source of “RIA Novosti” in the Federation Council said that Arashukova charged in the killings of two people and causing grievous harm to another, the organization in Karachay-Cherkessia organized criminal group in 2010, and also in the forgery of documents that allowed him to become a member of the Federation Council.