The ninth planet of the Solar system was a mysterious ring

Scientists at Cambridge University (UK) and the American University of Beirut (Lebanon) came to the conclusion that the deflection TRANS-Neptunian objects can be explained by the effect of gravity is not Planet X, and unusual disc of small icy bodies. Their findings the researchers published in the repository arXiv and the article in the Astronomical Journal. 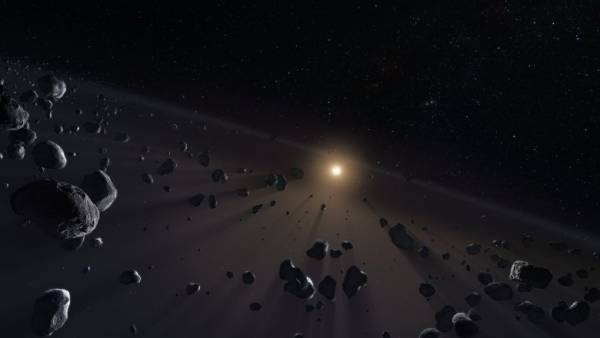 TRANS-Neptunian objects (TNO) is called the celestial bodies that revolve around the Sun, but located beyond the orbit of Neptune. Astronomers have discovered that some of the nice characteristics of their orbits stand out among other such objects. The existence of such anomalous groups due to the influence of gravity by a large, not-yet-detected object. This is the argument in favor of the existence of the ninth planet of the Solar system (planet X) of the class “super-Earths”, remote about 200 astronomical units from the Sun. Orbit super-earths need to be very elongated and deflected from the plane of Earth’s orbit at a sufficiently large angle.

Asteroid Apophis can collide with Earth. If this happens, then after 49 years

In the new work, the researchers showed that the observed clustering can be easily explained by the presence of a narrow disk (ring) TRANS-Neptunian objects, whose total weight is comparable with the mass or a hypothetical super-earths of ten Earth masses. One interesting feature of the ring is relatively high eccentricity, that is, the form it strongly deviates from a circle. According to astronomers, this configuration may be stable because of the gravity of the disc itself.

Scientists conducted a simulation of the dynamics of the disk to determine its possible effect on the orbits of the known TNO with the effects of the gravitational fields of the outer planets. The results of the theoretical calculations match the observed. Moreover, the clustering of orbits in terms of gravitational effect of the disk was stable for an extended period of time. The ninth planet, according to the findings of some experts, could not be long enough to ensure the stability of the anomalous clusters.