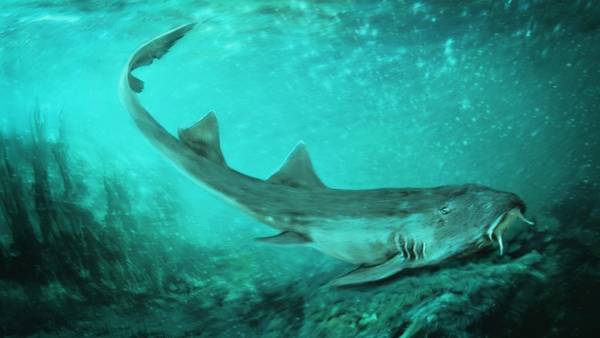 American scientists have discovered a new genus of ancient sharks, which was named in honor of the Galaga game due to the fact that the teeth of these sharks reminded the researchers of the space ships of the aliens from the game. Article about the discovery published in the journal of Paleontology.

Described species and genus of freshwater sharks, Galagadon nordquistae, small size (to 45 cm) are relative to the modern carpet sharks, or wobbegongs occurring in the West Pacific ocean and Eastern Indian ocean. The remains of sharks aged about 67 million years old found near the famous Tyrannosaurus Rex skeleton “sue”.

Terry gates (Terry Gates) from the University of North Carolina and his colleagues found two tons of rocks two dozen shark’s teeth are smaller than one millimeter and found that they belong to a new genus, and species of sharks — the fourth appearance of carpet sharks to the area. Judging by the teeth, this shark ate the small fish, snails and crayfish, the scientists write. To name a genus of sharks in honor of Galaga, where the protagonist is shooting at alien spaceships, reminiscent of the found teeth, suggested school teacher Nate Bourne, working with gates in the laboratory of the Museum of natural Sciences North Carolina state. And the specific name Galagadon nordquistae received in honor of volunteer Karen Nordquist, who helped to look for shark teeth in the remains of the breed.