The Committee on information technology, information and communication recommended for consideration in the first reading the draft laws on the prohibition of the publication of fakes and abuse of state symbols on the Internet, the correspondent of RNS with a meeting of the Committee. 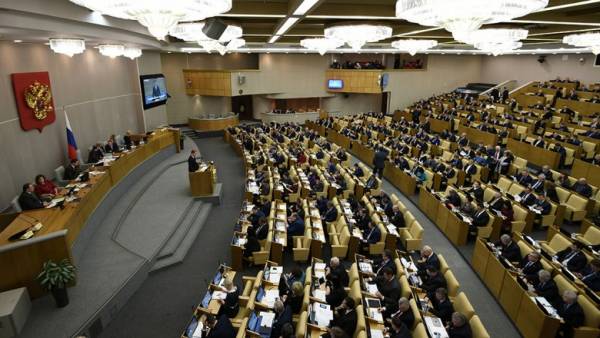 “On the first bill — one against, one abstained,” he summed up the results of voting on the bill on fakes the head of the Committee Leonid Levin.

“Also — one against, one abstained,” he added about the bill osokorbleny.

Levin recalled that the Committee had previously promised to wait for the conclusion of the government on both bills.

“It was reported. Moreover, it is conceptually supported both bills,” said Levin.

He added that the Committee had comments to both bills, which are to be worked out. Also, the bill supports the security Committee, the Deputy noted.

“We believe that it will be possible to consider these comments in preparing the draft laws for the second reading”, — said at a meeting of the Committee, the sponsor of the bill, the Deputy Evgeny Vyatkin.

In his speech on the need for the bill banning the spread of fake information, he noted that, in particular, on the creation of the bill influenced the emergence of false reports on the Internet after the tragedy in the shopping center “Winter cherry” in Kemerovo.

“Our parliamentary party will not support neither of these bills,” — said the Deputy of the party Vadim Denikin. He noted that the norms on the prohibition of insults and slander are already provided for in existing legislation.

At the end of December 2018, the head of the Federation Council Committee on the legislation Andrey Klishas, Senator Lyudmila Bokova and the Deputy Dmitry Vyatkin in the Duma introduced a bill prohibiting to publish in the media and on the Internet false public valuable information, creating a threat of life of citizens, mass disturbance, etc. in Addition, they introduced a bill prohibiting insulting in a rude form of society, state, official state symbols of Russia, the Constitution of the Russian Federation and government agencies.