In the area of the Kerch Strait burn the two ships 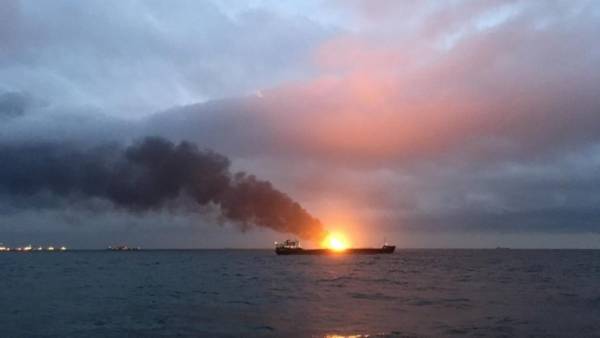 Two ships under the flag of Tanzania burn in the Kerch Strait, one of them, according to preliminary data, the explosion occurred, told TASS in the press service of Rosmorrechflot.

In the Novorossiysk marine rescue coordination center reported that the accident killed 11 people. As reported TASS a source in the emergency services, killing at least 14 people.

The fire could have happened due to safety violations, TASS reported a source in the emergency services.

“Previously, it could be a violation of safety when transferring fuel from one vessel to another,” — said the Agency interlocutor.

As reported TASS on Monday, the Director of “Crimean sea ports” Alexei Volkov, the incident does not affect the navigation on Kerch-Yenikalsky channel.

Maritime rescue coordination centre of Novorossiysk reported that the rescue team members burning the courts involved about 10 vehicles. To the rescue of sailors brought three spacagna.

“Left the ship “Smolny” in the area of emergency from Kerch. This vessel is serious intended, including for carrying out of rescue, it belongs to one of the Kerch private companies”, — said the Deputy head of the administration of Kerch Dilyaver Mangazeev.