The baptism of Russia: what did the neighbors

About the Embassy of faith and scandalous marriage of Prince Vladimir. Evidence of contemporaries. 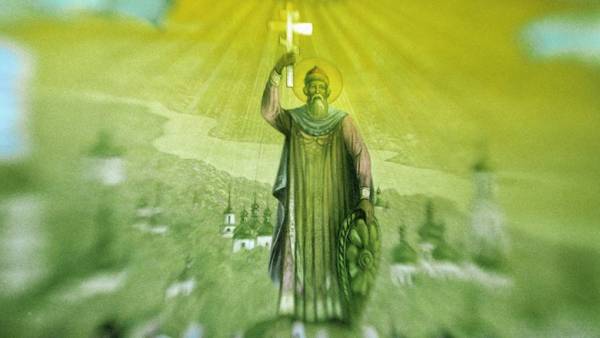 The baptism of Russia, held by Prince Vladimir in the end of X century — the most important event in the history of ancient statehood that determined for centuries to come her cultural and spiritual development. Naturally, it was reflected not only in ancient written monuments, but also in the testimonies of foreign authors.

Was it the Embassy?

In the “tale of bygone years” the story of the baptism is preceded by the semi-legendary narrative about the “testing of the faiths” by the Kievan Prince Vladimir. In particular, in article 987, the company said about sending Russian embassies to other Nations to study of their worship. These data, some researchers considered unreliable, find unexpected confirmation in the work of the medieval Arab scientist and naturalist and physician al-marwazi (XI-XII century):

…Sent messengers to the ruler of Khorezm, a group of four people from [among] approached the king. They [have] independent king, [who] calls himself and titolata boulder… Sent them [the horesmshakh teachers] to teach them the law of Islam and convert to Islam.

According to al-marwazi, a Russian delegation visited Volga Bulgaria to familiarize with the practice of the Muslim faith. From Bulgar Russian ambassadors could go and farther to the East in Khorezm, with which the Volga Bulgars had close ties and where they often turned on religious matters.

Complete the story about Russ a message about their successful attacks on various black sea and Caspian towns, what there is evidence of a number of Arabic and Persian sources.The Baptism Of Russia? Not news!

As you know, religious choice in Ancient Russia was finally made in favor of Christianity. Cost (“the way from Varangians to Greeks”) and culturally Russia was associated with Byzantium. In addition, Byzantium in the X century was the most powerful country of the neighbors of Russia — the successor of the Roman Empire with beautiful temples, crowded cities, developed crafts. And in most of Russia were Christians, baptized here, the warriors of Prince Igor and Princess Olga.

In fact, the baptism of the Rus appear in Byzantine sources in the ninth century, a hundred years before the universal Christianization. And the baptism of Rus by Prince Vladimir appears as the next (not the first) stage.

With the baptism of Prince Vladimir was tied up and his marriage with the Byzantine Princess Anna, sister of emperors Basil II and Constantine VIII — the marriage, to put it mildly, uncharacteristic for the matrimonial practices of the Empire, for the haughty Byzantines agreed to form an Alliance with the “barbarians” only in very exceptional circumstances.

About these circumstances tells the story of XI century chronicler John Skylitzes, explaining “a scandalous marriage” is an acute need for Byzantine emperors to the military assistance of the Russian troops.

A similar interpretation of events and people familiar with Eastern authors. Most details of the baptism of Russia, and leading up to this event the circumstances we find in John of Antioch (XI century). He wrote that the Byzantine Emperor in 987 revolt Bardas Phokas and the position of the ruler became so dangerous that he was forced to seek military assistance to the Russian Prince Vladimir, the fee for which was the marriage of Vladimir to Anna: