“God does not like “test purchases”: what is water Baptism the Holy

MOSCOW, 18 Jul — RIA Novosti, Alexei Mikheev. Today Orthodox believers — the eve of the Epiphany, the day when all the churches for the first time committed the great blessing of the waters (the second will be the feast of the Baptism of the Lord). The people of this water is credited with the ability to heal all diseases, and a wonderful property not to deteriorate. And still you think that night after Christmas eve all the water in the taps and in the waters is sanctified of itself. 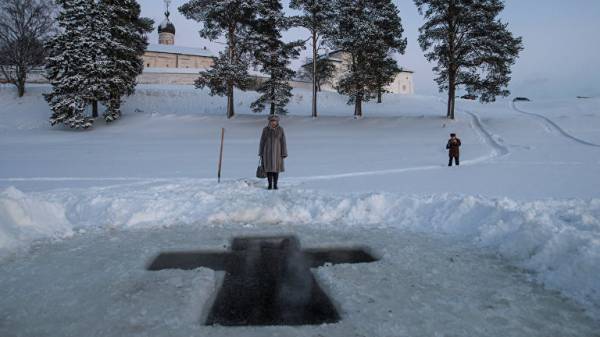 Whether so it and what will attempts to verify its sanctity — in the material RIA Novosti.

The feast of the Epiphany, or Epiphany — remembering the day when Jesus Christ came to the Jordan river where he baptized by the prophet John in Russia is traditionally preceded by an “eve” or the eve of Epiphany. Since ancient times in both day committed Great blessing of water. Today, she sprinkles dwelling and drink on an empty stomach and early in that water baptize new members. Just go swimming in the baptismal water, as usual these days, was unthinkable — it was regarded as to the great Shrine.

Initially the water on Epiphany just gathered to drink. In the fourth century, St. John Chrysostom spoke about the special sign, this water is not contaminated. The tradition of special prayer for the blessing of water on this day appeared in Antioch in the fifth century and gradually spread throughout the Christian world, although a century later in Constantinople Epiphany believed the water accumulated in the night of the feast of the fountain in front of Hagia Sophia. From this evidence, it is evident that the water was collected for drinking, not bathing in it.FR Gennady (Voytyshko)head of information service of the Synodal Department for religious education and catechization of the Moscow Patriarchate’sa Sea full of fish

The practice of sanctification of sea and river waters, common in Russia today also has nothing to do with the traditions of the ancient Church. “In the rank of consecration of water says nothing about immersion in this water, bathing in it — only about drinking and sprinkling of houses. Therefore, the water for such a consecration should be drinking — not salty, not a swamp or a dirty river,” said the priest.

of the Baptism of Rus: what did the neighbors

Bathing in the baptismal water has been repeatedly condemned by Church authors and specialists in the liturgical Constitution. Father Gennady reminds us that diving in the pond for the cross, thrown to the priest (the practice, common today in Greece), too, bears no spiritual benefit, and to justify the consecration of the seas that they fish swim, which you can then eat quite wildly.

“No fish in the water consecrated on the Epiphany, and other nonsense, there is no question in any source. After the diving for the cross the sanctification of sea water with the purpose of sanctification fish — another Greek theological news,” says the monk.