Moscow. January 15. INTERFAX.RU — on the hospital of Kuznetsk (Penza oblast) were beds made of boards and chairs due to the large flow of patients, according to a staff person in the social network.

Earlier in one of the groups in social network “Vkontakte” there was a picture where you can see that in the ward next to the usual bed design of boards and chairs. The publication gathered for two days more than 250 reviews.

Under the pictures the hospital staff Denis Denisov has posted a review of the medical institution in which he confirms the truthfulness of the image. 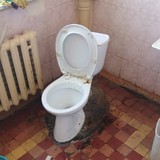 “In the dining room are cats, and in the chambers of the cockroaches”the Patient was told about the poor sanitation in the hospital Magnitogorsk

“The administration of GBUZ “Kuznetsk on the hospital,” explains that the pictures really are the ward of the therapeutic Department of the hospital. To determine the cause of hospitalization in the “auxiliary space” of unscheduled administrative bypass medical departments. Found that the reason for such placement patients had a large number of emergency hospitalizations in the last days,” — said in comments Denisov.

Explained that “in the therapy Department № 1 only in the period from 9 to 13 January, was hospitalized in the emergency order 61. As of 14 Jan, 60 beds are 77 patients.”

“Patients with the “extra beds” will be translated into empty seats after discharge completed treatment of patients within one to two days”, — stated in the text.

In a press-service of the Ministry of health of the Penza region to Agency “Interfax” has informed on Tuesday that social networks posted the official stance of the medical establishment on this situation.