Scientists have found in the museums of new species. And he’s already extinct

These sharks have not seen one in the wild or in the markets since 1934. 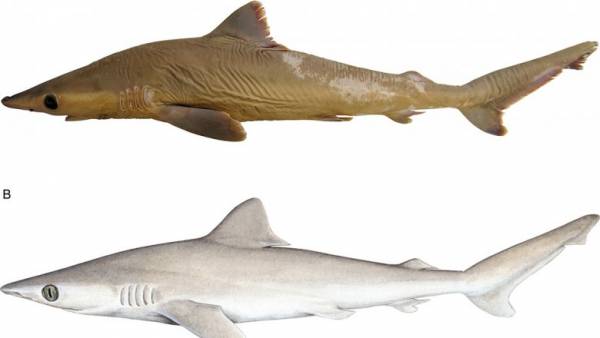 Scientists from the U.S. and Australia found in Museum collections a new species of gray sharks in the wild the species was not met with the 1930-ies, so that, according to scientists, Carcharhinus obsolerus, or, as they called it, the lost shark, could become extinct. Article on the study published in the journal PLOS ONE.

Surfer tripped over the shark and fell

In 1897-1934 years in Vietnam, Thailand and on the island of Borneo found three very young sharks caught in up in the Zoological collections of museums in Austria and the United States. Scientists found it difficult to clearly define a species: superficially they resembled grey shark Carcharhinus porosus, but this species is found only in North and South America. Given the small size of sharks and the fact that she was a coastal way of life, William white (William White) from the Australian national fish collection CSIRO and his colleagues questioned the fact that the Asian specimens really belong to this species. The authors note that the discovery of new species of this group are not rare: in 2002-2012 described more than 180 species of cartilaginous fish, and in 2012 — more than 80 species. Thus, in the present century discovered more than 20 percent of the living species of sharks and rays.

The scientists compared the Museum specimens of four other species of the same genus and concluded that the morphological differences between these samples, in particular, the characteristics of the teeth, the fins and cartilaginous skeletons, highlight them in a separate view.

Where could inhabit this shark, it is not clear: in particular, it is difficult to say exactly where I caught Museum specimens, because they are found in the major centres of the fish trade.

The authors write that in the coastal ecosystems of Southeast Asia where presumably species, there is a very active shark fishing, and given the fact that more than 80 years, nobody has seen him, “an urgent need to assess the risk of extinction for the red data book of International Union for conservation of nature”.

Gizmodo refers to the ichthyologist David Ebert, who says that sharks of this genus already was a similar story. Species Carcharhinus leiodon, the only representative who was caught in 1902, in the waters of Yemen, was believed to be extinct until 2008, when the shark was at the fish market in Kuwait. Almost the same thing happened with Carcharhinus borneensis: the first shark caught in 1858 from Borneo, in 1937 it was considered extinct, and in 2004 it is also found at the fish market. The fate of the sharks Carcharhinus hemiodon is not yet known: it has not seen since the 1970-ies. The search for the “lost sharks” at the fish market in the last two decades also yielded nothing.