The speaker of the house of representatives has called his treatment a waste of time legislators. 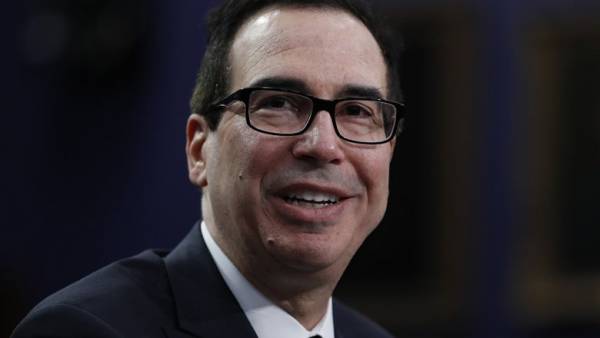 Treasury Secretary Steven Mnuchin made before the American congressional report on the lifting of sanctions on the assets of Russian billionaire Oleg Deripaska’s En+ and UC Rusal and EuroSibEnergo. The decision to lift the sanctions is not through the Kremlin and “has no political motivation,” said Mnuchin reporters after the meeting, which was held behind closed doors (quoted by Bloomberg). According to the Minister, these companies play an important role in the world market of aluminium.

US authorities will monitor that En+ and UC Rusal has complied with the obligations they have assumed in the negotiations with Washington, said in a statement Mnuchin, which he did before meeting with legislators. He recalled that under the terms of the agreements Deripaska will lose control in the companies and he will remain under US sanctions. Companies that are preparing for the lifting of sanctions, had pledged to provide the Ministry of Finance an unprecedented level of transparency in their actions to ensure that the Russian businessman will not restore control to them, said Mnuchin.

“Treasury will be on the lookout for that En+ and UC Rusal has complied with those obligations. If these companies do not fulfill the conditions they face are very real and quick consequences including the re-introduction of sanctions,” — said the Minister of Finance.

Speech Mnuchin criticized the speaker of the house of representatives Nancy Pelosi. She called the briefing “one of the worst” she’d ever seen during the administration of U.S. President Donald trump, Bloomberg reported. Mnuchin’ve said almost nothing and just spent the time members of Congress, Pelosi said.

Mnuchin in turn, said that “somewhat shocked” by the comments Pelosi, according to CNN. According to him, he spoke in front of Congress just two days after their request about the meeting and answered about half the questions.

Deripaska, whose fortune Forbes estimates at $6.7 billion, and eight companies came under US sanctions in early April, 2018 In December, the U.S. Treasury has indicated that it may lift sanctions against En+ group, UC Rusal and EuroSibEnergo.

Nothing of the kind in the history of American sanctions did not exist.

The conditions for the lifting of sanctions are as follows: Deripaska within 30 days reduce the proportion of En+ (owns 48.1% of UC Rusal) from 70 to 44,95%; Swiss trader Glencore will exchange a stake in UC Rusal (8.9 per cent) for shares of En+ group; VTB (U.S. Treasury, the Bank calls one of the possible recipients of a package of business) and investors associated with Deripaska would have to pass on the right to vote “independent third party”. Deripaska’s company will need to provide US complete information about its activities and not to change the registration from a foreign into Russian without the approval of the new Board of Directors and notification of the U.S. Treasury.

The unprecedented decision of the Ministry of Finance of the USA has drawn criticism from Democrats in Congress. In early January, the chairmen of the seven committees of the house of representatives urged the Agency to postpone the lifting of sanctions. The congressmen stated their concerns about the conditions of the “deal with the Russian oligarch”.

In particular, parliamentarians have indicated that the agreement provides for the maintaining of a significant share of Deripaska in En+, as well as the transferability of the shares of Energo-metallurgical group “associated with the Kremlin” and under U.S. sanctions VTB Bank.

The plan of the U.S. Treasury to lift sanctions against companies may enter into force on 19 January, if Congress does not block it. Us lawmakers must vote to 18 January, although previously asked to extend the consideration of lifting the sanctions.