MOSCOW, January 7. /TASS/ — the Liturgy is held in all churches on all continents. 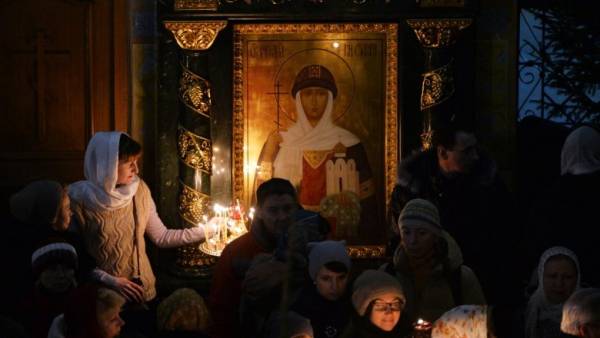 Orthodox people of Russia and other countries celebrate Monday Christmas event, which is 2019 years ago began a new era in the history of mankind.

In the Russian Orthodox Church has more than 36 thousand more than 900 temples and monasteries in nearly 70 countries.

The Liturgy is held in all churches on all continents.

According to the Julian calendar Christmas is celebrated, except Russian, and also Serbian, Jerusalem, Georgian, Polish Orthodox churches, Athos monasteries, some Protestants and Catholics of the Eastern rite. A solemn service is held and in the place of the birth of Jesus Christ in Bethlehem.

The Patriarch of Moscow and all Russia Kirill on Saturday night began the celebration of divine service in the Moscow temple of Christ the Savior.

The love of God, manifested in the birth of the Savior, brings people the real world. This world do not be swayed by worldly turmoil, social upheaval, political sentiment, and even armed conflicts in the world for Christ’s intimate lives, such spiritual power that he tramples it all earthly grief and attack.The Patriarch of Moscow and all Russia Kirill

Traditionally, the Primate of the Russian Orthodox Church in the celebration of Christmas is very intense program. “He will visit the fgbi “national medical research center of Oncology. N. N. Blokhin”, where we will congratulate the staff and young patients, will visit the children’s Christmas and will communicate by video link with the cosmonauts, carrying his service on the International space station.

At the end of the day Patriarch Kirill will make a great Compline at the Cathedral of Christ the Savior, after which the bishops and clergy of the Moscow diocese congratulate their Hierarch”, — told reporters the press service of the Patriarch.