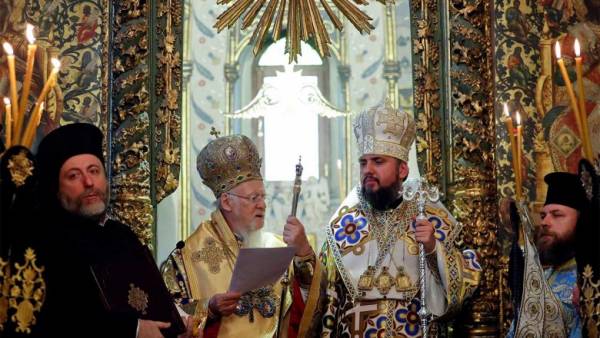 About it the correspondent of TASS from the Cathedral of St. George in Istanbul, where was the transmission of the document.

Before the ceremony Thomas in the Cathedral the Liturgy for the day of the Epiphany. After welcoming speeches by Patriarch Bartholomew and Metropolitan Epiphanios.

Meanwhile, the press service of the Ecumenical Patriarchate still did not provide the official text of the Tomos of autocephaly.

At the same time in the text of the Tomos, which is 5 January 2019 was signed by the Ecumenical Patriarch Bartholomew and the translation of which circulated in the Ukrainian the Ukrainian Ambassador to Turkey, noted that “the rights of the Ecumenical Patriarchate to the Exarchate in Ukraine and the sacred stavropigio remain nepremennym”, and all “significant issues” PCU must decide through Constantinople.

In addition, according to the document, the autocephaly of the PCU is limited by the boundaries of the Ukrainian state, it could not appoint bishops or to create a parish outside of Ukraine and can not produce the Holy oil necessary for worship, in contrast to the existing in Ukraine the Ukrainian Orthodox Church (UOC).