Victory or death. 8 battles in which the fate of Russia hung in the balance

Not once in Russian history there were cases when the question of the preservation of the state was put at stake. 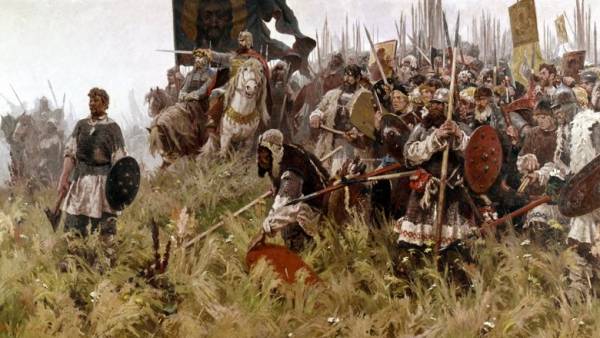 The millennial history of Russia consists of a long series of wars, changing the brief periods of peace. The struggle for the right to live according to their own perceptions of good and evil was fierce. Not once in Russian history there were cases when the question of the preservation of the state was put at stake. Sometimes it had to be decided in one battle that determined the future.

The invasion of Batu was a real shock for the Russian lands. None of the principalities could not resist the pressure of the nomads alone.

Grand Duke Vladimir Yuri Vsevolodovich went into the forest near of the Sit ‘ river, where he intended to assemble a strong team of Russian forces, in order to give the Batu General battle.

You can argue about what would have ended this battle, if the Russians had time to prepare for it, but in reality the plans of the Grand Duke failed.

The location of Russian troops has been discovered in that moment, when they were not ready for battle. The battle on the river Sit turned into a massacre in which case Burunday almost completely destroyed the Russian forces. Died and Yuri Vsevolodovich, whose severed head was presented to Batu.

It’s a battle for their own future Russia lost. The time of the Tartar yoke.

Four years after the disaster on the river Sit the Russian land faced a new threat. Using the actual loss of Russia’s sovereignty, the Livonian order was intended to subjugate the lands of Pskov and Novgorod, to a lesser extent affected by the invasion of the Horde. It was not only about the seizure of territory is, in fact, was a crusade, the purpose of which in the end was to be the obedience of Christians to Rome.

But on 5 April 1242 the retinue of Prince Alexander Nevsky together with the militia had defeated the knight army. The threat of final loss of Russian self-identity at the time passed.

The consequences of defeat 1238 was so significant that it took half a century to found a Russian Prince, ready to challenge the Horde.

Moscow Prince Dmitry Ivanovich, who gathered under his command the army collected from many Russian principalities went out to meet the forces of the Horde Temnik Mamaia, intending to return to the Russian position, in which they were in 1238.

The battle of Kulikovo field on 8 September 1380 was fierce and bloody, and ended in favor of the Prince, which later became known as Dmitry Donskoy.

Thus full liberation from the yoke did not happen just two years later, in 1382, Khan Tokhtamysh burned Moscow, and the Russian had to resume the payment of tribute. However, the Horde didn’t take big trips, trying to fight the large Russian army. Finally the yoke was completed only a hundred years later, in 1480, “standing on the Ugra”. That battle did not happen, and the Horde chose to leave without a fight, last but not least was associated with the memory of Kulikovo field.