Geologists found a mysterious ancient pyramid in the forests of Indonesia

MOSCOW, 17 Dec — RIA Novosti. Radar images of the island of Java has helped geologists to discover the mysterious pyramid in the depths of its forests, whose age may be around 28 thousand years. 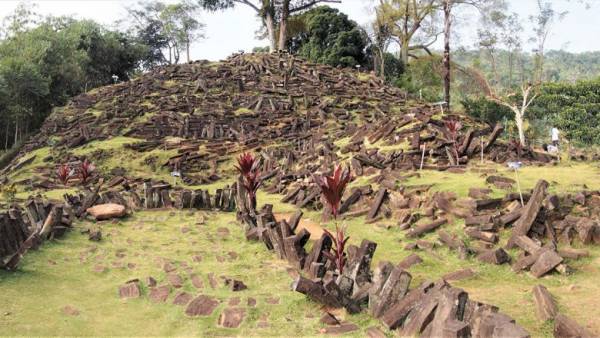 They talked about the opening of a meeting of the American geological Union, held in Washington, DC.

“In the past, we believed that this hill was some kind of building. It turned out that it extends far downward, consists of several layers and is actually the entire volume,” says Andang Bakhtiar (Andang Bachtiar), a geologist from the oil company Maurel & Prom.

In Egypt found the tomb intact age-4400 years. Here’s how it looks

Pyramid, traditionally the main symbol of Ancient Egypt cannot be considered an exclusive know-how of the inhabitants of the Nile valley.

Similar structures were built and other ancient civilizations, including their neighbors, the Sumerians, Indians, Mayans and Aztecs, as well as inhabitants of the forests of South-East Asia after their acceptance of Buddhism.

Despite their great size, many of the largest pyramids in the world, especially buildings of the Maya, remained unknown to mankind until recently, when the archaeologists had the opportunity to study the former territories of these ancient empires with the help of satellites, radar and remote sensing systems of the Earth.

Bakhtiar and his colleagues accidentally discovered one of the largest and potentially the most ancient man-made pyramid of the Earth, studying the slopes of mount Padang, located in the Western part of the island of Java.

Here, as noted scholars, archaeologists two centuries ago found a kind of “mound”, Gunung Padang, covered with a large number of stone blocks. Historians quite a long time believed that under this structure, presumably the temple during the late stone age, may hide other, more ancient and massive structure.

Bakhtiar and his colleagues conducted a series of excavations on the slopes of this mountain, and “enlighten” it with radars and other devices. They allow you to look for hidden cavities and to look for traces of ancient artifacts, watching the changing of electrical or magnetic resistance of the soil.

Much to the surprise of scientists, all the surroundings of this mountain, a total area of about 15 hectares, was part of the same man-made structure partly covered with soil and overgrown forest.